It is with great pleasure that Chelsea and I introduce to you the sixth generation of the Callaway-Jones family—Rowen Michael Jones. He entered this world on August 23rd and if you will allow proud parents a little bias, he is the most handsome little boy we’ve ever seen.

After thinking a long time about what to name our son, we explored a very long list of possibilities. Chelsea especially liked Rowen as no one else she knew had the name and it sounded strong and his middle name, of course, honors my father, Mike Jones. In our family we have several “R’s: Raymond, Ramon, and now Rowen.

I also like how it stands out when you say it out loud. I have two great friends, also named Cody, so you can imagine how many heads were answering “Yes,” when one of our moms called out for us.

Needless to say, my mother, Lorene Jones, is the happiest grandmother in a seven-county area. Over the years her hints about wanting a grandchild were less and less subtle. Now, we are guaranteed a willing volunteer anytime the occasion arises where Chelsea and I want to get away for an evening out, including Aggie football. There won’t be that many at first because we both cannot wait to meet, know, and love our new little man.

He may grow up hearing the Texas Aggie fight song in the nursery and learn more about his Aggie roots as he grows up. We don’t actually think that is a lullaby, but babies can fall asleep to anything, right? I’ll let you know soon enough how we all get to sleep through the nights. In my work life I’m used to sleeping light and waking up at any hour of the night, so it makes sense that many times I’ll take the night shift so Chelsea can try to sleep. We’ll all find a routine pretty soon.

Rowen arrived in this world on the afternoon of August 23, 2021. It was one day following our burial of my grandmother, Dian Bennett Jones, having capped off our ceremony with a champagne toast, just as she had requested.

It reminded me of the quote by Alfred Tennyson:

“The old order changeth yielding place to new, and God fulfills himself in many ways, lest one good custom should corrupt the world. Comfort thyself: what comfort is in me I have lived my life and that which I have done, may he within himself make pure, but if though should never see my face again, pray for my soul. More things are wrought by prayer than this world dreams of.”

There’s no doubt that prayer was the center of our lives this week and long before. We spend so much time anticipating birth and death in this life, we must make the most of every moment in between where it is possible to create memories to truly last a lifetime.

What Chelsea and I are delighted to await are a series of Rowen’s firsts. On Friday he had his first checkup and passed everything with flying colors. Another collective deep breath exhaled. There are so many milestones waiting to be recorded in his baby book. First word, first step, first ball he picks up and either kicks or throws. And on it goes.

One of the most precious gifts we can have is to be blessed with a large family and if you’re lucky, someone takes charge of genealogy and exploring our ancestry, which can take years to pursue, document, and preserve for future generations. Fortunately for us, it was my grandmother, Dian B. Jones, who was also our family tree expert.

As it stands today, Rowen Michael Jones represents a ninth-generation Texas, with roots in Bryan-College Station, Crockett, and Palestine, Texas. While I believe he will ultimately join a long line of Aggie grads in his future, who knows yet? We want to leave that option open for him, just as we do his future occupation.

Neither my dad nor my granddad, nor I thought we’d be destined to lead our family business, but when the opportunities presented themselves, we set about to do our very best to make that happen. It’s not that we didn’t want to do it. It was just that it was never demanded of us, at least early on in our lives. Now if I wanted to earn a salary as a teenager, I knew where I could get a job for the summer or after school. But I found plenty of time not to work, too, at least at the office.

For many years I made soccer a full-time hobby that required the same amount of attention as a job. I was certainly as serious about it. I remember my dad taking the time to coach our Brazos Magic ’79 Soccer Team. We won the state championships in both 1991, and again in 1998. This made us the only boys’ team to win the state championship in its first and last years of eligibility, and we won over 400 victories. From my dad’s dedication to me and my friends, he founded a total of three soccer teams, and we have the Aggieland Youth Soccer Tournament as one of the premiere soccer events in the state thanks to him.

After my dad died in 2004, the City of Bryan dedicated and renamed the soccer fields at the BRAC complex in his honor. 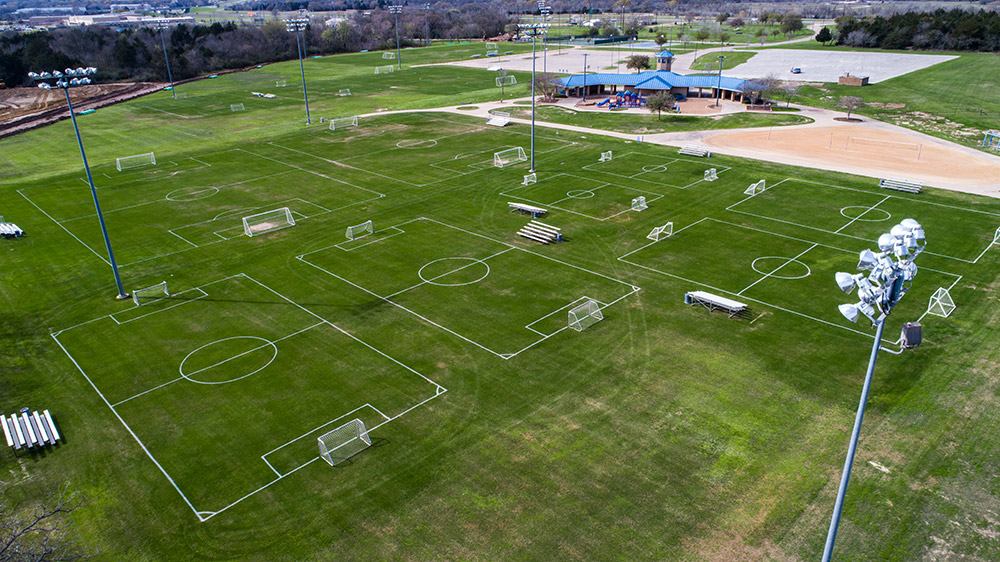 Whether or not Rowen chooses to play soccer in his high school years will be up to him, but I can’t wait to introduce him to the sport early on, if only to strengthen his eye/foot coordination and reaction speed and skills. Oh, who am I kidding? I want to play soccer with my son! I’m also prepared for him to get past me for a goal. I will be thrilled if he plays baseball and burns a pitch right past me.

I fully expect him to catch fish bigger than mine, and it won’t be long before he and I are in the golf cart for a quick nine holes before dinner after work in the summers. If that wasn’t meant to be, I don’t think the City of Bryan would have brought in BigShots Golf to the Travis B. Bryan Midtown Park, literally across from our Bryan funeral center.

And it will be fun to have a companion to help me shop for his mom on special days and holidays. He will be my second-best friend (next to his mom), and we might very well collect our list of “Don’t tell Mom” items along our daily journeys, all very mild, mind you, like if I let him drive the truck a little before he might be age appropriate. You know.

Chelsea has her own list of “want to’s” planned for equal time. She was both sister and mother figure to her brothers as they were growing up, so she is already fully skilled at knowing what mischief little guys can get into and anticipate possible disaster before it happens. They may also have their own “Don’t tell Dad” list.

I can already envision it now. They’ll color at the kitchen table to create his first artwork, then I’ll bring him to the office to learn Adobe Photoshop, or something like that. To quote Dr. Seuss from “Oh, The Places You’ll Go”: “You’ll get mixed up, of course, as you already know. You’ll get mixed up with many strange birds as you go. So be sure when you step. Step with care and great tact and remember that Life’s a Great Balancing Act. Just never forget to be dexterous and deft. And never mix up your right foot with your left.”

“Oh the places you’ll go! There is fun to be done! There are points to be scored. There are games to be won. And the magical things you can do with that ball will make you the winning-est winner of all.”

And, with one more thought to guide him through life:

“Don’t cry because it’s over, smile because it happened.”   ~~Dr. Seuss

And away we will go on our adventures. God bless you, Rowen, and thank you for arriving on time.

With thanks to all of you who have been reaching out to us during this special time,

Cody and Chelsea, and as we’re now known, Rowen’s parents