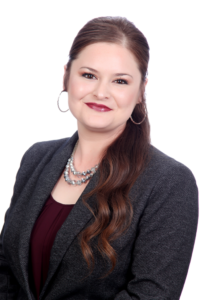 Poignantly, Kristen worked with the third and fourth generations of the Atchley family, where they also had the only locally owned crematory in the county, just as we do here in B-CS. And, at Laurel Land they also have a beautiful memorial park just as we do at Bryan’s Rest-Ever Memorial Park. It’s just one more reason she’s a perfect match for Callaway-Jones Funeral and Cremation Centers.

Kristen began knowing early in her life that she wanted to be a funeral director. It began as early as fourth grade where she began studying Egypt and all the ceremonial rituals that occurred with the death of a loved one. Her father, a career Army professional, noticed her interest and told her, “You know there’s a profession for that—funeral directing.” That’s all it took for her to continue her reading and interest.

When Kristen was 17, her beloved godmother, Elena, passed away from cancer. At that service, where Kristen realized that, although it was hard to let her godmother go, it was so comforting to see her wearing her favorite dress, beautifully surrounded by flowers she loved. The funeral home staff who attended her could not have been more caring. She said, “That’s the path I want to be on for my career. I want to help and take care of others.

She began work with us on Monday, and we had a chance to talk about life outside the job. As a child, she was used to moving a lot, as her Dad was in the service. By the time she’d reached her senior year of high school, he had retired and they were living in Fort Polk, Louisiana.

Having decided about her junior year in high school that she wanted to be a funeral director and help care for people, she researched where she could study for her professional credentials. Dallas fit that call perfectly. During school she had the opportunity to intern with several funeral homes and saw the best in each one. She earned her degree and certification from the Dallas Institute of Funeral Service.

For 10 years she worked as a respected Funeral Director at Laurel Land in Fort Worth, where she personally oversaw and trained apprentices. Then she and her husband, Jeremy, relocated to Tennessee as he studied for his degree in History at the University of Tennessee in Knoxville, a topic they both love. Jeremy has completed his teacher’s certification after having also served in the U.S. Army. In Tennessee, Kristen worked for a family-owned funeral home and enjoyed greatly the distinction of being part of the community where you work.

She said, “I learned so much from mentors there who walked me through everything. Every funeral director has their own way of doing things, and you learn from each one.” Kristen enjoys working with families to create custom services that are uplifting to all who attend.

In their spare time, Kristen and Jeremy love the outdoors. They hike and enjoy riding motorcycles together and already they appreciate the beauty of the Brazos Valley as they are currently exploring our area. Another hobby that Kristen and Jeremy are passionate about is golf! Whether in local golf tournaments or even in disc golf, that’s their favorite sport. Kristen also has a very creative, artistic side as she enjoys crafting and making gifts, from Christmas wreaths, to dreamcatchers, to candles. She stays busy!

We’re excited to have Kristen on our family team, and we thank all of you for entrusting your loved ones to us so that we continue to grow here. Drop by Callaway-Jones Funeral and Cremation Centers in Bryan anytime and say “hello” to the newest member of our family team.