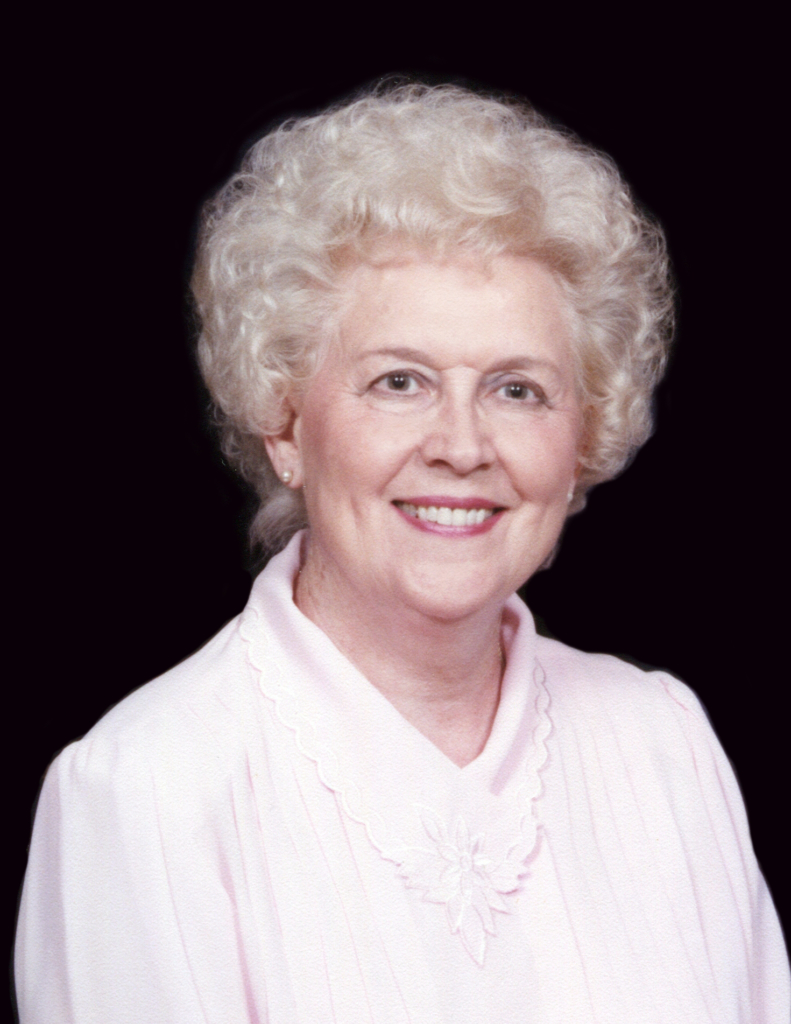 A family visitation will be held at Callaway-Jones Funeral Home in Bryan on Sunday, June 16th, 2019, from 4 pm – 7 pm. A celebration of life service will be held Monday, June 17th, 2019, at 11 am at First United Methodist Church of Bryan. Pastor Rick Sitton will officiate. A lunch reception will immediately follow in the church gymnasium. Burial will be at 3:30 pm at Old Bethel Cemetery near Bryan.

Dixie was born July 26, 1928, just outside Buffalo, Texas, on their family farm in a rural community called Martin Town. Dixie was the youngest of three children born to Noah Martin and Mary Ann “Mollie” Childre Martin. After a little time living on the farm, Dixie’s mother decided she did not want her two daughters being raised in the country and moved her family into Buffalo so her children could receive a good education. After some time, reluctantly, Dixie’s father moved to town too.

Growing up around the time of the depression was hard, but the Martins stayed very busy. Dixie’s mother ran the telephone switchboard in Buffalo. With the switchboard being located inside the Martin’s home, there was rarely a dull or quiet moment. Dixie always enjoyed helping her mother as a switchboard operator. In the Martin house, you could often hear Dixie and others saying: “Number Please!?”

While growing up, Dixie loved learning. She took her school work and education very seriously and studied faithfully. She attended Buffalo schools, where she was an excellent student and voted queen of her freshman class. Dixie graduated high school in 1945 as valedictorian and vice-president of her senior class of 22 students. She enjoyed singing, volleyball and was active in her church too.

In the summer of 1945, at the age of just 16, (there was not 12th grade then) Dixie moved to Austin, Texas, to attend The University of Texas. After two years, she left Austin and moved to Huntsville, Texas, to be closer to her sister Virginia.

In Huntsville, a not well known newer resident, Dixie Martin, became very well known overnight when she won a brand new 1948 Chevrolet Fleetline automobile in front of the entire town at a business merchant’s raffle give away. While in Huntsville, she attended college and worked for the telephone company and a clipping bureau—clipping articles out of newspapers for other companies and businesses to use for research and public relations purposes.

While attending Sam Houston State Teachers College in Huntsville from 1950-1952, Dixie’s roommate introduced her to a charming pharmaceutical salesman from Grapeland, Texas, that everyone just called: “Woodell.” At first, Dixie was not very interested, but on a second visit, while Dixie was feeling under the weather, she fell in love with Woodell after he cured her aliment with some home remedies he had learned while working many years in the drugstore in Grapeland. In 1952, Dixie graduated from Sam Houston State Teachers College, with a Bachelor of Business Administration degree and a teaching certificate.

After their honeymoon to Fort Worth, Texas, Dixie moved to Bryan—where Woodell was already living. With teaching jobs being hard to find, Dixie went to work for Bryan architects Caudill, Rowlett and Scott, as a secretary for the company. In 1955, she started her teaching career at Snook High School, in Snook, Texas, where she taught business classes from 1955 to 1959. From 1959 to 1961 and 1970 to 1990, Dixie taught typing, shorthand and bookkeeping classes at A&M Consolidated High School in College Station, Texas. In 1960, Dixie organized and founded the Bengal Belles Drill Team at the high school—an organization that remains strong today, almost 60 years later. In 1976, Dixie was named the Business Teacher of the Year for District Six, awarded by the Texas Business Education Association. From 1961 to 1970, Dixie took some time off from teaching, while she and Woodell were blessed to welcome two sons into the world.

Upon her retirement from teaching in 1990, Dixie and Woodell continued their love of traveling, as they traveled in their recreational vehicle from New York to California and everywhere in between. They especially loved their frequent trips in their camper to Branson, Missouri.

Dixie was a faithful member of First United Methodist Church of Bryan and the 2×2 Sunday School Class for 65 years. For 45 years she was involved with Delta Kappa Gamma, a service organization for educators. For 28 years, she was an active member of The Woman’s Club of Bryan.

Dixie is survived by her loving sons Gene Martin Woodell and John Royall Woodell, both of Bryan.

Dixie loved meeting new people and always wanted to know where you were from and what activities you were involved in. She was a beautiful person both inside and out. She was a special person who thought of others before herself. She had a warm, caring and embracing spirit. Dixie was often the first person to arrive with a meal for a new neighbor or for someone who was sick or had lost a loved one. She made sure that every bride and expecting mother had a shower and party to honor them. She hosted countless events and parties at her home, even a wedding reception or two. She hosted many Thanksgiving and Christmas meals, always making sure to include those that did not have a place to go for the holidays.

Dixie will best be remembered for her bright welcoming smile, her caring heart, and for her love for her husband, her family, her church and for God. She was an excellent and dedicated wife and mother, and a loving aunt, sister and daughter.
She will also be remembered as a gifted teacher who loved to teach and who had compassion and patience with her students–challenging and encouraging them to be the best they could be. When Dixie’s students were successful, she felt successful. Above all, those that knew Dixie best will always remember her kindness and the way she made everyone feel welcome, needed and special. Dixie will be greatly missed by all those that loved her so dearly.