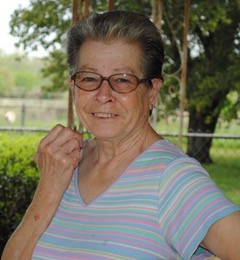 Philomene Nemec, 78, of Bryan, went to be with our Heavenly Father on Tuesday, August 27, 2019. Visitation will be held from 5 to 7 p.m. Tuesday, September 3rd, with the Rosary at 6 p.m. at Callaway-Jones Funeral Center, 3001 S. College Ave., Bryan. The Funeral Mass will be held 10 a.m. Wednesday at St. Joseph’s Catholic Church 507 E. 26th St. Bryan, with Monsignor John McCaffrey officiating. The Graveside Service will follow in Old Smetana Cemetery.

Patsy devoted her life to her children and grandchildren. she loved to play cards, dominoes and other games with them. She worked for BISD food services for 28 years where she was lovingly called “grandma” by the students.

Philomene was born on March 17, 1941 in Bremond, TX to her parents, Bill and Alice Markowski. She enjoyed gardening and admiring birds. Philomene cared deeply for others and loved her family with all her heart. She was affectionately call “Grandma” by many.