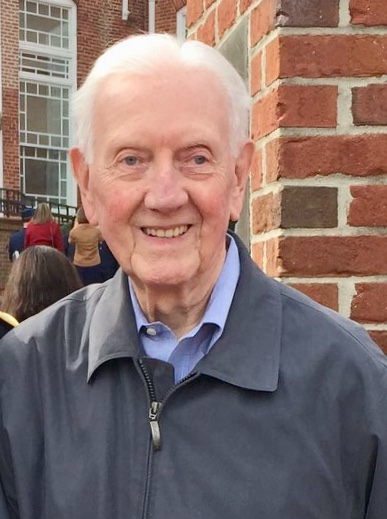 Oswald “Ozzie” Olsen Warwick received his crown of glory on August 6, 2019, one week after his 94th birthday.  He passed quietly and peacefully at home, reuniting with his beloved wife of nearly 70 years the day before we would have celebrated her first birthday in Heaven.

Ozzie was born on July 30, 1925 in Brooklyn, NY to Oswald Kristian Warwick and Dagny Wroldsen, both immigrants from Norway.  In 1929, his family traveled back to Norway for a 6-month visit.  When the Great Depression struck, his parents decided to stay. They purchased a farm on a small island off the southern coast.  Ten years later, the family moved back to the US, thereby avoiding the Nazi occupation of Norway six months later

Arriving in Brooklyn, speaking only Norwegian, he soon adapted to life in the USA.  He attended Brooklyn Technical High School, an elite NYC public school. In 1943, he joined the Army Air Corps (predecessor to the USAF) and started training as a bombardier and navigator. When the war ended, he was still in training.

Upon discharge in 1946, he returned to Brooklyn.  At a party for the returning servicemen, he met the love of his life, Elsie Sylvia Nordquist, whom he married on September 3, 1949.  Their first child, son Stephen, was born 14 months later, followed by daughters Gail (in 1952) and Barbara (in 1957).  As their family grew, they welcomed 11 grandchildren and 12 (soon to be 13), great-grandchildren.

In 1946, Ozzie began a career with Scandinavian Airline Systems, first at LaGuardia airport, and soon thereafter at JFK International Airport.  At JFK, he dispatched SAS’s North America-Scandinavia flights. In 1970, he accepted the position of Station Manager for SAS at SeaTac airport in Seattle, Washington, where he remained until retirement in 1984.  After many wonderful years in Washington, Ozzie and Sylvia relocated to College Station, Texas in 2015.

Ozzie was truly part of the “greatest generation.”  He was a man of few words, but when he spoke, his words were impactful. He was a man of deep faith, integrity, optimism, and self-discipline.  A gentleman at all times, he was an exemplar of a Christian husband and father.  Ozzie was a life-long member of the Lutheran Church, Missouri Synod, most recently as a member of Bethel Lutheran Church, Bryan, Texas.

His love for his wife and life-partner was remarkable, lasting 70+ years. Even to Sylvia’s last, difficult days, he loved her faithfully and dutifully, staying true to his marriage vows to the end.  He greatly missed the love of his life and is now home with her again, just in time for Mom’s birthday.

During the months since Mom went to the Lord, Dad spoke frequently of God’s faithfulness, blessings, grace and love.  He treasured time with his children, their spouses, his grandchildren and their spouses, and his great-grandchildren.  The little ones adored their Grandpa ”GG,” and he returned their adoration by showering them with love.

Ozzie was preceded in death by his wife, Sylvia, parents, sister, Esther Estebo, and a brother, Walter Warwick. He is survived by his brother, Roy of Branson, Missouri, sister-in-law Lyn (Al) Wonstolen of Castle Rock, Colorado and his 3 children: Stephen (Janice) of College Station, Texas,  Gail Vitale (Frank) of Orting, Washington and Barbara Sutton of Bryan, Texas, 11 grandchildren and their spouses and soon-to-be 13 great-grandchildren, as well as numerous nieces and nephews.

He will be missed by all but there is joy in knowing that he has been united with Christ, and will get to worship Him alongside his beautiful bride for eternity. We rejoice in knowing that, in Christ, we will all be reunited one day.