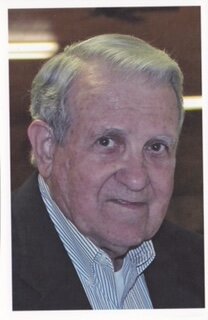 Theodore Waymann Nedbalek, 83, of Caldwell, Texas, was welcomed in to our Lord’s heavenly home on August 22, 2021, after a year and half long battle with leukemia.

Visitation will be held at Callaway Jones Funeral Home in Bryan, Texas on Friday, August 27, 2021 from 6:00 p.m. to 7:00 p.m. The funeral service will be held at the New Tabor Brethren Church in Caldwell, Texas on Saturday, August 28, 2021 at 10:00 a.m., with Brother David officiating. Interment will follow at New Tabor Brethren Church Cemetery in Caldwell, Texas.

Waymann was born on September 20, 1937, in Bryan, Texas to Mary Louise (Kopetsky) and Theodore “Ted” Nedbalek. Waymann grew up in Bryan, Texas and graduated from Stephen F. Austin in Bryan. In 1956, Waymann met his wife, the love of his life, Betty Laverne (Peters) at a dance in Deanville, Texas. On June 8, 1957, Waymann and Betty were married at Elizabeth Lutheran Church in Caldwell, Texas, and resided in the Bryan/Caldwell area for most of their life. They had four children together: Alan Wayne Nedbalek of Snook, Cheryl Strucely of Caldwell, Lorey Herrmann of Caldwell, and Kathy Ewald of Caldwell.

Waymann had a strong work ethic and learned the value of hard work at a very early age; he worked two jobs as a teenager: one as a milk delivery boy and another as a newspaper boy (riding a scooter) for The Eagle. After delivering newspapers, he moved in to other positions within The Eagle; worked as a finance officer for the Texas A&M Payroll Department; insurance agent for Farm Bureau; accountant for Woodson Wholesale Office; and then made a change of scenery and moved north, to Michigan, where he worked for C.B.S. as an accountant. He returned to Caldwell after a couple years, and began working for Weatherford Door Company in Bryan, Texas, where he retired. In the 1970’s he was the Director of the Burleson County Fair Parade and worked with the Chamber of Commerce on various fair events. He was a member of the Elizabeth Lutheran Church, where he served on the board for many years, and later a member of the New Tabor Brethren Church.

Waymann loved America and celebrating the Fourth of July with a bang! As the provider of fireworks for more than 20+ years, Waymann selflessly set up and lit the fireworks (with help from his fireworks family) each year for the Elizabeth Lutheran July Fourth Celebrations and later the New Tabor Brethren Church Firework Display. The fireworks displays were easily one of his favorite hobbies and passions (he would get an almost six month head start in planning every year)!

Among his other hobbies, Waymann enjoyed baseball and coaching little league, playing in fastpitch softball leagues (his team even played against the “King and His Court”, a touring exhibition, and won the game! an unlikely feat), football, parasailing, airplanes, bowling (and traveling to the National Bowling Tournaments), skiing, hunting, and traveling. He was a fan of the Aggies and the Astros, and never missed a game (especially once DVR became available)! He loved music, especially Molly B.’s Polka and Elvis, and had the once-in-a-lifetime experience, at a café in downtown Bryan, of saying “hello” and eating beside the King of Rock-and-Roll himself, Elvis Presley.

Waymann had a servant’s heart. He was a very generous man and always wanted to offer a lending hand – If you ever needed anything, and he was able to help, he would be there for you in a heartbeat. Foremost in his heart was church and family; those were the two most important aspects of his life. And last July he gave the best advice on life, and living, to his family through a Bible he covered with a ” My iPhone book 4G.O.D. cover” and advice from one of his many emails: “we’ve got to stay young in our minds… have plans to get things done…. ‘though our birthday says too old, in our mind we’re still somewhere between 25 & 50… and you must keep that frame of mind everyday! Work and play and you can keep your youth… don’t think any other way!!! LIVE… we’re all still young if we want to be.”

In lieu of flowers, donations may be made to MD Anderson Leukemia Cancer Center, Houston, Texas.