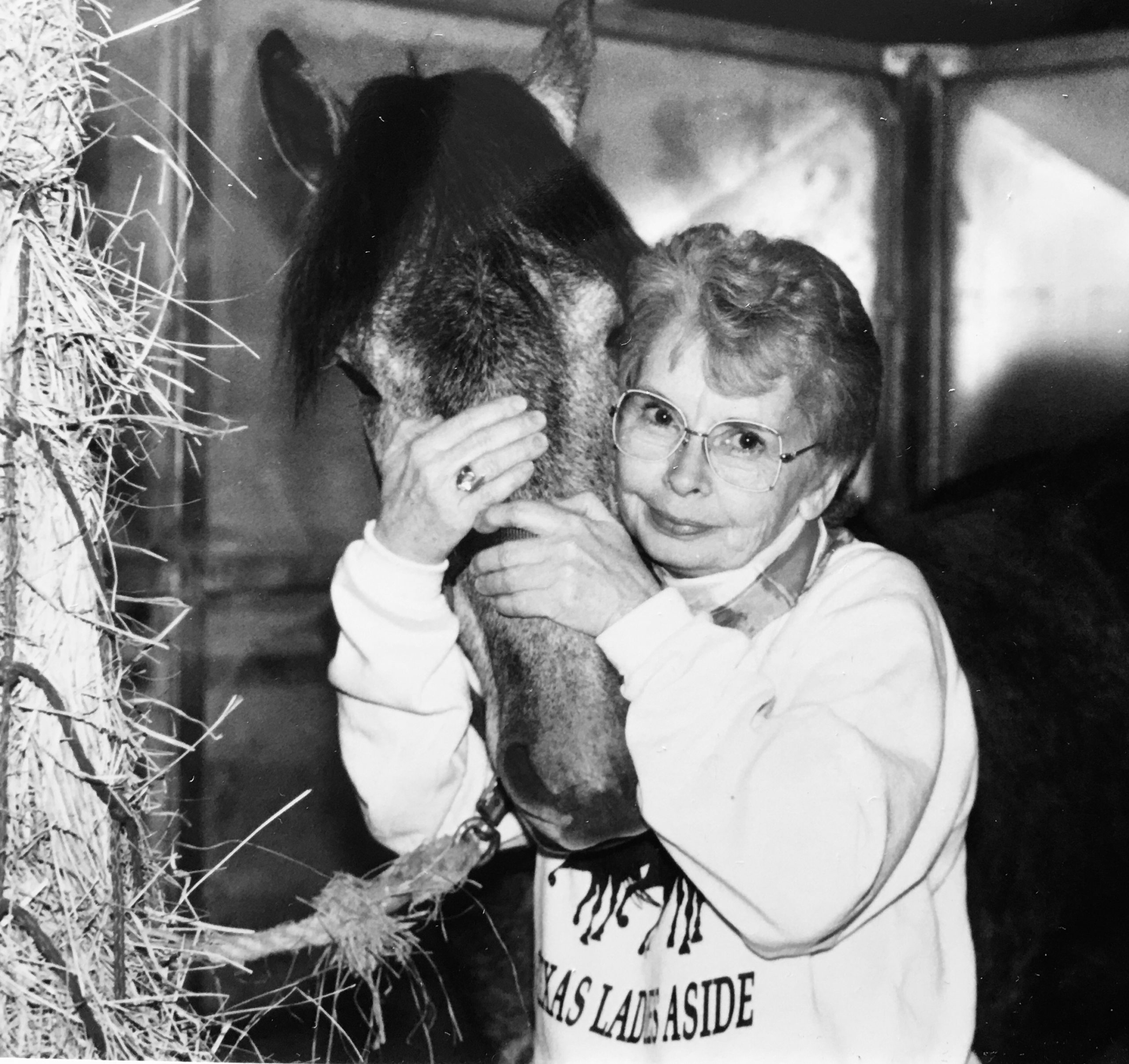 On Monday, July 20, 2020, Theo Richardson, beloved mother, grandmother, and great-grandmother, passed peacefully from this world at the age of 89. The daughter of the late Earl and Frances Richardson of Columbus, Mississippi, Theo was born in 1930 in Alabama and raised on a farm just across the border in Mississippi. She was mother to five children: Charlie, Paula, Sharon, Stevie (deceased), and Susan. As an Air Force pilot’s wife, she experienced all sorts of different exotic cultures: she lived in France, North Carolina, New York, Tripoli, Libya, and Texas and vacationed in Italy, Egypt, Malta, and Tunisia.

In the latter half of her life, Theo settled down in Brazos County, Texas. In about 1976, she purchased the University Frame Shop in Northgate, and it quickly grew into Theo’s Gallery. For over 20 years, Theo’s became the place to go for framing and art. Theo had an excellent eye for color and balance. After learning about where a customer’s piece would hang, the room’s color scheme, lighting, etc.., Theo would guide them on the best way to frame their art. Frequently, return customers would just drop off their precious items and tell Theo to “call when it’s ready,” knowing that it would be just what they wanted.

She had repeat customers from all over the United States. Unsurprisingly, there are thousands of Aggies who have Theo’s Gallery (or University Frame Shop) labels on the backs of their framed diplomas. Framing from Theo’s shops can also be found hanging in the George H.W. Bush Museum and Library as well as the Texas State Capital. (Theo’s claim to fame was framing the only portrait of Steven F Austin painted while he was alive.)

Theo was well known for her forthright presentation and subtle sense of humor. Once, when a customer ordered five custom frames and asked if she could have them done that afternoon, Theo responded “This is not McDonald’s.” Although kind, even generous at times, Theo did not suffer fools or people who looked down on her as “merely a shop keeper.” She loved skewering overinflated egos, a skill she honed on high-handed professors from a certain nearby university. One such prof came into Theo’s Gallery with an attitude, and a poster; he had been to the first U.S. King Tut exhibition in Louisiana, and he wanted his souvenir framed. While working with him, Theo mentioned that she, too, had seen the King Tut exhibit. Surprised, the prof asked, “Oh, did you go to Louisiana?” “No,” Theo responded. “I saw it in Cairo.”

Theo also became an avid horsewoman. For many years she and her beloved horse Moe (Condamo) were members of the Texas Ladies Aside (a magnificent team of nationally performing sidesaddle riders who featured in many well-known parades; named the official Equestrian Drill Team of Texas). Our intrepid rider received several awards from the TLA over the years for being the bright spot who brought new ideas to the group, such as adopting two miles of Hwy 47 as it entered into Aggieland because she thought that they should give back to the community. Theo was a small woman who made a big impact. She brought a fresh way of looking at the world, a sense of adventure, and a great feeling of fun in life.

The event that probably best defines this woman is when Theo persuaded members of the TLA to join her in “crashing” the Hwy 47 Grand Opening, much to the surprise and delight of then Brazos County Judge Al Jones. Just as the judge was about to start his speech, five ladies in white satin and gold fringe, bearing flags and riding side saddle, appeared over the hill and came gliding down the new highway on their smooth-gaited Peruvian Pasos, creating such a fabulous photo op that the Eagle just had to put them all on the front page!

Surviving Theo are 4 children, 7 grandchildren, 2 great-grandchildren, 3 siblings, 1 ex-husband, many nieces and nephews, her dog Butch and her parrot T.G. Awk, plus a passel of beloved friends. Near the end, Theo was content knowing she would be rejoined with her family and friends who had gone before her, and especially with her dearly beloved horse, Moe. Theo, from your family and friends who love you, both two and four-legged, we wish you Happy Trails.

There will be no funeral. Theo has donated her body to the Forensic Anthropology Center at Texas State in order to contribute to the advancement of justice, law enforcement, and forensic sciences.

In lieu of flowers: donations in her honor may be made to Hospice Brazos Valley or to the Aggieland Humane Society.

In lieu of putting on dark, uncomfortable clothes, staring at a box, and watching people cry in order to honor this excellent woman: pick a good evening when the sunset’s gonna’ be beautiful, drag your favorite outside chair to a good viewing spot, pour a glass of something nice, and just enjoy the moment; she’ll be enjoying it too.