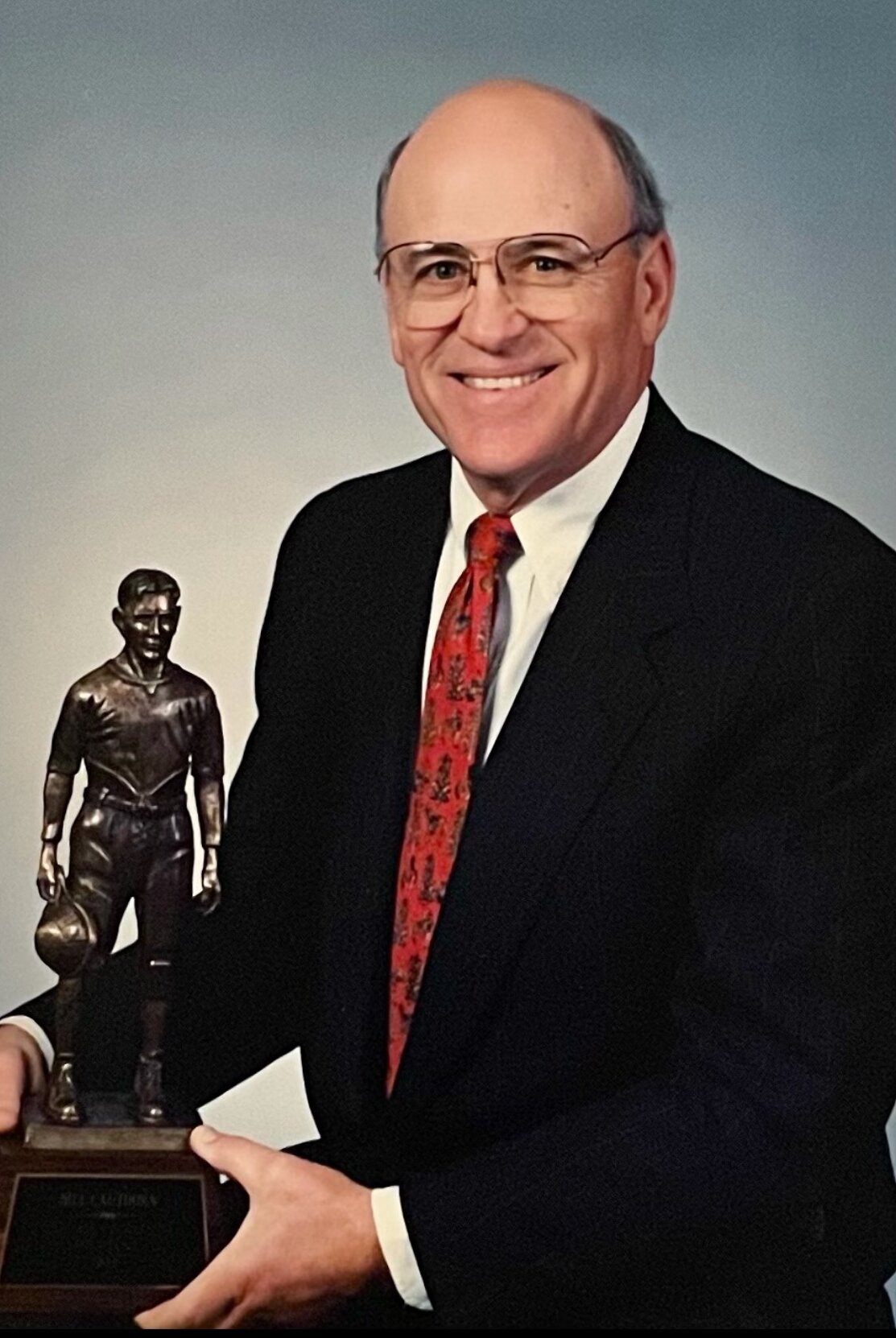 Sidney William (Bill) Cauthorn, of Del Rio, Texas passed away peacefully, surrounded by family on November 1st, 2021, he was 83 years old.
Bill was born to Robert “Bobby” and Alice Cauthorn on March 6th, 1938, in Del Rio, Texas. He lived in both Del Rio and the ranch at Juno while growing up. Bill earned a scholarship to play football at Texas A&M, where he played for the legendary coach Paul “Bear” Bryant. Bill would say he practiced for Coach Bryant more than he played. On one occasion, Bill and his father Bobby, were having breakfast in the Memorial Student Center at Texas A&M when Bobby looked up and saw Coach Bryant walk in the door. Bobby told Bill “Here comes Coach Bryant.” and Bill replied “Dad, he doesn’t even know my name.” Coach Bryant walked up to the pair and said “Good morning, Bill. This must be your Dad.” and reached out to shake their hands. Bill was a graduate of the Class of 1960 with a degree in Industrial Engineering aka Industrial Distribution.
His life revolved around his family, Texas A&M University, work, Del Rio, and Val Verde County. Being a Mason, he led a spiritual life that was not known by many outside the family. Bill made many dear and special friends over his time on earth and loved each and every one of them. Bill was straight and to the point which translates to if you don’t want his opinion, don’t ask. He would probably give it to you anyway.
On June 18th, 1959, he married the love of his life, Kay Zechlyn Mills of Pandale and Del Rio, whom he had dated since the 6th grade. Upon graduation, they both moved to Milwaukee, Wisconsin where Bill had secured a job with Ingersoll Rand as a Sales Engineer. While working for Ingersoll Rand he and a co-worker, Gene Sorrells, opened an Ingersoll Rand dealership in Oklahoma City. In 1964, with two young boys, Bill and Kay decided it was time to move back to Del Rio where he went to work for the Del Rio National Bank. A few years later he became Senior Vice President of the Del Rio Bank and Trust, where he ultimately became President and CEO. In 1980 Bill led the way by forming Westex Bancorp, Inc. and spent the rest of his career opening banking offices in Brackettville, Sonora and San Angelo and investment offices in Del Rio, San Angelo, Uvalde, Boerne and Bryan. Bill was integral in Westex’s purchase of Anco Insurance in Bryan, Texas in 2001 and the formation of The Bank & Trust of Bryan/College Station in Bryan in 2008.
In the early 1970s Bill and A.C. Ozuna formed a partnership to make plastic fishing worms which was one of the first Maquiladoras in Del Rio. In the mid 1970’s, Bill, his father Bobby and brother Jim purchased their first Coca-Cola bottling company in San Marcos, Texas and a few years later purchased another Coca-Cola company in Del Rio. Later, the trio and Toby Summers formed a Coca-Cola canning company in Cuero, Texas.
In addition to his business accomplishments Bill would count spending time with, being involved in the lives of, and attending the sporting events of his five grandchildren as a major accomplishment. He also served as President of the 12th Man Foundation at Texas A&M, was a Mason, a pilot, an artist, and calf roper. Bill loved to fish, hunt with his friends and family, ski and attend the horse races in Ruidoso, NM, and ranching. He was also a golfer, played tennis, and was a Peewee football coach. Bill loved traveling the world with Kay including biking through France.
Bill is survived by his wife, Kay Mills Cauthorn, son Sid and wife Kim and their three children Abb (College Station), Hattie (Houston) and Mills (College Station). Son Guy, his wife Keri and their two children, Drew (Newport Beach, CA) and Sidney Aquino and her husband Michael (Houston). Brother Jim Cauthorn and his wife Ann of San Marcos and Alice (Junior) Esquivel and her husband Ed of Dallas, brother-in-law Henry Mills and his wife Maxine of Del Rio as well as numerous nieces and nephews. Bill is also survived by the many friends and partners that he shared his life with at the Bank and Trust and Anco Insurance.

The family would like to specifically thank Sabina Rueda, Juan Rueda and their extended families for their love and support for many, many years. Also, Carla Maltos, Martha Trevino, Terri Joiner, Raquel Ramos and Gracie Espinoza of Vida Real Home Health in Del Rio. The people in Bryan that we would like to thank are Caroline Kimble, Sheila Burns, Ty Richards, Marquita Darnell and Patricia Vanegas of Visiting Angels. The employees and management of Parc at Traditions, including but not limited to Tatum Fava, Krystale Bartusek, Jessy Zarate. They went above and beyond in helping our family in Bill’s final few days.

There will be a private family service at Traditions Country Club.

In Lieu of flowers, the family is requesting that you honor Bill by donating to the Shumla Archeological Research and Educational Center, Loaves and Fishes of Del Rio or First United Methodist Church of Del Rio.
Gig’em!!!