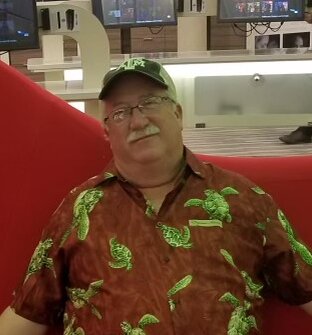 Kerry Ray, 64, of Bryan, TX, passed away peacefully on Monday morning, July 5, 2021 in Bryan. A casual, Celebration of Life will be held at Yesterday’s Bar and Grill on Sunday, July 18 from 2-4pm honoring the memory of Kerry. Family and friends are being served by Calloway-Jones Funeral and Cremation Centers, Bryan-College Station.

Kerry was born in San Angelo, TX to his parents, Cecil Roland Ray and Gene Clifton Ray. His family moved to Ft. Worth briefly for a year and then to El Paso where Kerry graduated from Irvin High School and then enlisted in the army for four years. After the army Kerry moved to Austin where he worked for his big brother John’s plumbing company. In 1981 Kerry followed his brother William to Bryan-College Station, working at several restaurants and then finally settling at Texas A&M University working in transportation. Kerry was a friend to all and met many friends on cruises and all around Bryan-College Station including some that were more like family such as George, Paul, Dixie, Ron and Mike to name a few.

His brother William Ray along with extended family and close friends request in lieu of flowers to please make charitable donations to your favorite charity in Kerry’s name. Kerry made donations to St. Jude’s Children’s hospital and that would be a great way to honor him if you don’t have a favorite charity. Express condolences at CallawayJones.com.