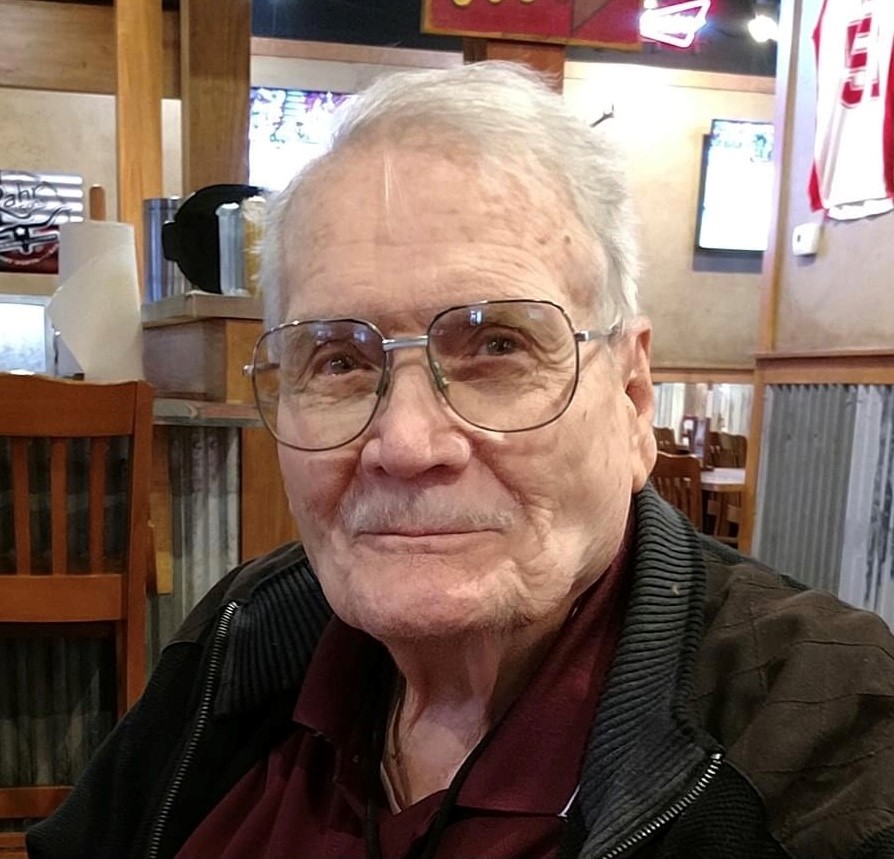 Gene Howard Hallmark was born July 15, 1930 to Elbert and Fay Hallmark in a dirt-floor house 10 miles east of Ardmore, Oklahoma. Howard grew up on a farm the 15th of 17 children, fourteen of whom lived to adulthood. He began school in a one-room school house in Durwood, a small Choctaw settlement in Marshall County, completing the first 4 years of school in 2 years and graduating from Durwood as the school’s only 8th grader. He graduated from Dickson High School at 15 and enrolled at nearby Murray State School of Agriculture in Tishomingo where he graduated with his associate’s degree at age 17. Already in the Oklahoma National Guard, Howard enlisted in the United States Air Force at 18 and after basic training and several weather/meteorology training assignments was sent to Guam (a proud Korean War veteran) where he flew into 18 named typhoons, returning to the United States in 1952. Stationed at Holloman Air Force Base outside of Alamogordo, New Mexico, he met and married Martina Cooper of Alamogordo in August of 1952 and immediately moved to Norman, Oklahoma where he entered the University of Oklahoma completing a Bachelor of Science in Zoology with a minor in Chemistry (1954) and a master in public health (1955).

Howard’s career took him west to Oregon and California where he ultimately changed careers from public health to ministry and education. From 1959 until his death, Howard’s vocation and avocation was in ministry in California, New Mexico, Texas, and Ohio (local church ministry and preaching, church camps, Christian schools, and university professor). Along the way, Howard and Martina had four children. Martina passed away in 1986. Howard married Jeanette Jensen of El Paso, TX in 1988; Jeanette died in 1990. Howard married Phyllis Eastham of Piney Fork, Ohio in 1994; Phyllis died in 2001. Howard married June Kelley of Timberon, New Mexico in 2007; June died in 2015. Meanwhile, Howard completed his Ph.D. in religion from Trinity Theological Seminary (2004) and in his retirement he and June moved to the Temple/Belton, Texas area where Howard spent his final years just as he had spent his entire life: serving in the local church, developing deep personal relationships with those he met, and telling stories and jokes to anyone who would listen.

Howard passed away in his home in Belton under Hospice care with his final words reported to have been “I need to go vote,” a fitting final word from one with a lifelong dedication to civic duty.

Preceded in death by his daughter Kezia Jane Hallmark. Howard is survived by three of his children and their families: Howard Haskell Hallmark of Rio Rancho, New Mexico; Arah Faye Hallmark Barham of Chico, California; and James Raymond Hallmark of College Station, Texas, along with many grandchildren and great-grandchildren from his children and stepchildren. A special mention to James and Sheri Hill of Belton (June’s daughter) who lived adjacent to him and watched over him like a hawk the final years of his life.

Howard was a calming and steady presence in work, at home, and in church throughout his life. Indeed, his life “was like the roots of a tree that went miles into the soil and came up in the character of all those he met.”