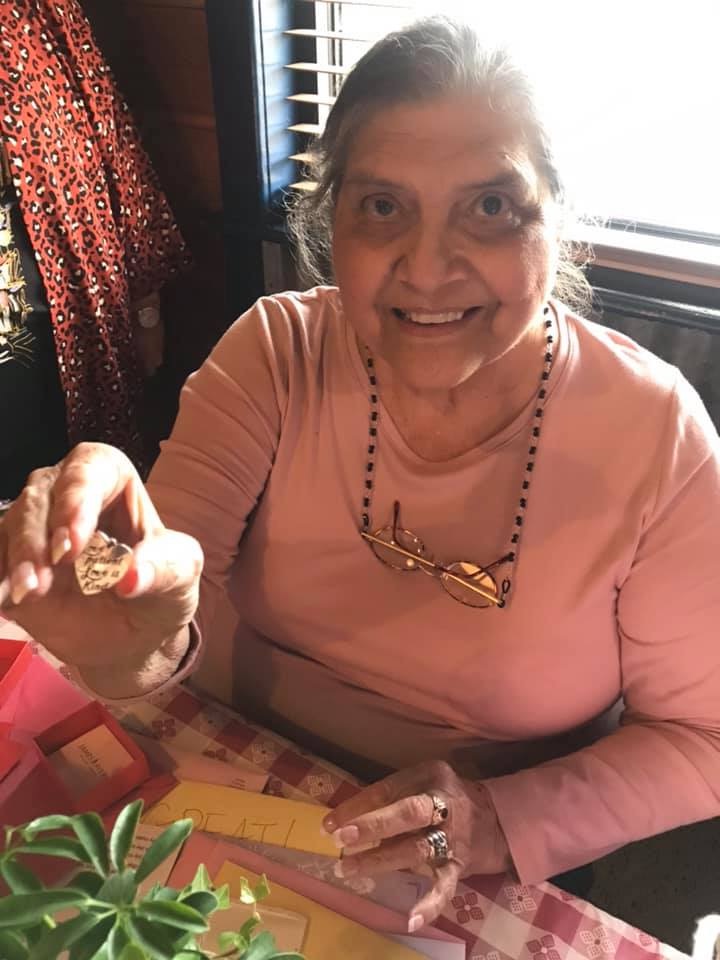 Esther Albright, 81, of Bryan, passed away on Wednesday, October 27, in Bryan. She was born on February 22, 1940 to Dionisio and Angelina Valdez Martinez in Huntsville, Texas.

The youngest of 12, she was very outspoken; at one point asking a visiting preacher to buy her some red patent leather shoes because “her parents never buy her red shoes”! Esther grew up to be a beautiful young lady, catching the eye of John Herrera, marrying him and having 4 children. She loved her family and raised them to love God. They were living in Bryan when John’s untimely death occurred in 1971. Esther was a fighter and very strong willed. With the help of many, she raised her family as a single mother. In 1974, while working as a librarian at Kemp Elementary School, she met the dashing Wayne Albright who swept her off her feet, marrying him 8 months later. They were happily married 46 years and he lovingly took care of her until her passing. She was a very talented woman, she sewed making her kids Halloween costumes when they were younger. She also painted several landscape pictures that now hang in her children and friends’ homes. She also loved quilting, needle point, and crocheting. It gave her great joy to cook at family functions and holidays, and she appreciated how everyone always complimented her on how great food was, especially her tamales, rice and beans. She enjoyed singing in church choirs and loved to sing Happy Birthday to her children and others on their birthdays. She relished the great outdoors and could often be found hunting, on the side of a bank fishing, sitting by an open fire or napping in the peace and solitude of the woods. She will be greatly missed and always loved.

She is preceded in death by her first husband, John Herrera; her parents, Dionisio and Angelina and her eleven brothers and sisters. Granddaughter Helen Huddleston Broughton.
In lieu of flowers, memorial donations can be given to the American Heart Association of the American Diabetes Association.

Visitation will be from 5 to 7 pm, Thursday, November 4, 2021 at the funeral center. Funeral Service will be at 11 am, Friday, November 5, 2021 at First Baptist Church – Bryan. Interment will follow in Rest Ever Memorial Park Cemetery.