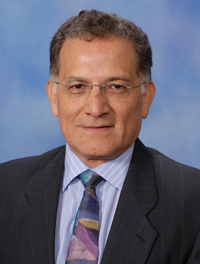 Edgar Sánchez-Sinencio passed away on November 20, 2020 in his home in College Station, Texas.  A private service is in the care of Callaway-Jones Funeral and Cremation Centers.

Edgar was born in Mexico City on October 27, 1944 to Feliciano Sánchez Rios and Esther Sinencio Recillas. He was a fun and mischievous child with red hair, for which he was often called “Rojo” or “Red” in Spanish.  He grew up surrounded by his brothers, sisters, and many cousins. He met his wife, Yolanda, through a family member and married her in 1969, after 5 years of courtship.

Edgar studied at the National Polytechnic Institute of Mexico City, where he received a degree in communications and electronic engineering in 1966.  He went on to get his Master’s degree from Stanford University in 1970 and his Ph.D. degree from the University of Illinois at Champaign-Urbana in 1973.  In 1974, he moved with his wife and young daughter to Japan to complete his post-doctoral studies at Nippon Electric, where his second daughter was born. Upon his return to Mexico, he joined the National Institute for Astrophysics, Optics and Electronics, in Tonanzintla, Puebla, where he later became head of the department of electronics.

In 1983, Edgar and his family moved to the United States where he became a professor of electrical engineering at Texas A&M University, a position which he held for 37 years, eventually heading the Analog and Mixed-Signal Center, holding the Texas Instruments Jack Kilby Chair and becoming a Distinguished Professor.

In July 2020, the endowed Edgar Sánchez-Sinencio and Yolanda F de Sánchez Chair was created at TAMU, with the generous help and support from his friends, industry, and former students to support a faculty member in his department.  A scholarship fund in his name has also been established.

Edgar loved to dance salsa, mambo, danzon, cumbias, and rock and roll and never missed a chance to do so.  He had a strong passion for photography and later in his life, for drawing.  He was a friend and mentor to many students and colleagues. He was a devoted husband, father and grandfather.

He is survived by his wife of 51 years, Yolanda Fuentes de Sánchez, his daughters, Liza Sánchez Fuentes (and husband Ian Alward), and Zenia Sánchez Fuentes (and husband Marc Morel), and three grandchildren Gael, Alexandra and Mateo, his brother Feliciano Sánchez Sinencio and his sisters Maria Esther Sánchez Sinencio and Esperanza Castelazo Sinencio, as well as several nieces and nephews.  In his professional life, Edgar is survived by his 61 Master’s students and 58 Ph.D. students, for whom he cared deeply.

Per his wishes, Edgar will be cremated.  Due to Covid-19 restrictions on outside gatherings, a small family funeral service will be held at Research Park in College Station, Texas on November 29, which will be recorded and shared with family, friends and colleagues.  A virtual memorial service will be held in the next few months, the details of which will be communicated to family, friends and colleagues.

In lieu of flowers, preferred memorials may be made as gifts in memory of Edgar Sánchez-Sinencio to:

Edgar lived with ALS for almost three years.  ALS is a progressive neurodegenerative disease that is 100% fatal.  Currently, there is no cure for ALS and there are extremely limited treatments. Dr. Appel has pioneered a treatment that focuses on enhancing the protective immunity of T-reg cells and anti-inflammatory microglia in neurodegeneration, which is considered by many researchers to be the most promising potential future treatment for ALS.

Myhre Syndrome is a rare genetic syndrome.  The Myhre Syndrome Foundation is dedicated to serving Myhre syndrome families by providing a network of hope and support and collaborating with scientific and medical communities to encourage and fund promising research.