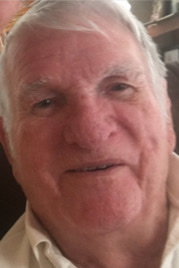 David T. Hutcherson, 85, formerly of Hodgenville, KY, passed away Wednesday, January 19, 2022, at the place he loved and enjoyed so much, Corpus Christi, TX.

David was born November 5, 1936 in Hodgenville, KY. He devoted his entire life to his family and friends as a true Christian. He served his Country as a Master SGT. in the U.S. Air Force for many years. He received a 2-year degree from Elizabethtown Community & Technical College while at the same time working as a civil service employee at Ft. Knox, and operating a dairy farm. David continued his education graduating from Corpus Christi University, and accepting a position with the IRS in Beaufort SC. Later he moved back to Corpus Christi, and with his wife they owned and operated a construction company that built many beautiful homes on North Padre Island.

Callaway-Jones Funeral Home in Bryan, TX is in charge of a graveside service at 11 A.M. (CST), Friday, January 28,2022, at Mt. Calvary Catholic Cemetery in Bryan, TX, where David T. will be laid to rest in the same grave with his wife of 55 years.

In lieu of flowers, please donate to your favorite charity in the memory of David T Hutcherson. Condolences may be expressed at Callawayjones.com.