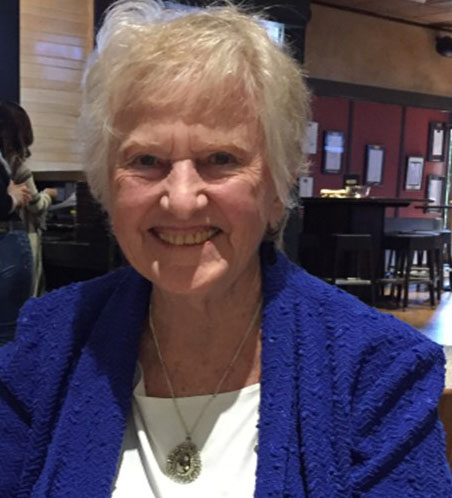 Darce was born the youngest of five children in a poor family during the Great Depression. At 13, she took on the responsibility of cooking and cleaning for her brothers and father while nursing her mother who was dying of cancer. At 20, she moved to Houston and met her first husband, Barney. 10 years passed, and despite being told she could never have children, Darce gave birth to Sharon in 1961.

A few years later, she became a secretary for a counseling agency, where she worked for five years. During this time, she lost Barney to suicide. In 1981, she married again and gained a daughter in law, Darlene, who became a second daughter to her. In 1985, Darce moved to the Brazos Valley and joined Grace Bible Church. She served there as the receptionist for many years and mentored young women and international students. In 2002, she became the proud grandmother of three amazing Colombian girls.

Darce was a beautiful and genuine soul who cared deeply for others and lent a listening ear to everyone. Her sharp wit never quit. She constantly used her gifts of service and hospitality to welcome people into her home, to care for those nearing the end of their lives, and to provide meals for families during times of stress. If we were to include everything that she was and what she meant to everyone, we could fill a book. The most important thing is that she was well loved.

A fund has been established to help cover health care and funeral expenses at https://gofund.me/1200cb68.

Cremation services are in the care of Callaway-Jones Funeral and Cremation Centers, Bryan-College Station.