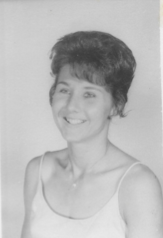 On August 24, 1940, a beautiful baby girl was born to her parents, W.E. (Shorty) and Pheby Stafford Castellow, of Yoakum, Texas. Betty Castellow and her three brothers grew up happy in Yoakum, even during some days and times others would consider rough. She was raised in a family of faith, specifically the Baptist Church. Betty had a distinct and special spirit about her, and it shined through the smile she shared, that immediately put you at ease.
Anyone who knew her said that she had the gift of listening. It was always something you felt in any conversation. She could cheer you up because of her true willingness to listen to you, and share her love with you.
Family was so important to Betty. She and her husband, Robert Wayne Matthews, were married for 40 years. She loved being surrounding by her family; any family gathering would include from one to four generations. Betty was forever young at heart, even being willing to climb on the back of a motorcycle! Betty took pride in creating a garden around her home and she took time and care with her flowers, as they were like children, too.
On February 27, 2021, Betty died at home in Bryan, Texas. She is preceded in death by her husband, parents, and her three brothers, Butch Castellow, Raymond Castellow, and Donald Castellow.
Betty is survived by her children: daughter, Pheby (Jerry) Anderson, of Aransas Pass; son, Bubba Matthews, of Aransas Pass; daughter Debbie (Bennie) Bird, of Snook; daughter Chris (Harold) Moore of Caldwell; son, Walter Matthews of Hearne; daughter Becky (Mark) Raley of Bryan; daughter Stacy (Sonny) Lenz of Iola; daughter Robbin (Dickey) Bohler of Franklin. Grandchildren include Michael Anderson, Ashley Hoban, Taylor Bird, Bridgette Bird, Mason Matthews, Cory Williams, DeWayne Pivonka, Tory Pivonka, Justin McCarty, Tiffany McCarty, Dawson Utz, Shelby Taylor, Ty Catalina, and Emberly Catalina. Betty is also survived by nine great-grandchildren.
A graveside service is set for Friday, March 5, at 12:00 Noon, at the Pilot Grove Cemetery in Yoakum, Texas.