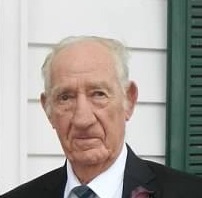 Barry Blum, 91 of Bryan, passed away on Saturday, January 29, 2022 with his family by his side. Visitation will be 5:00-7:00 pm Monday, February 7, 2022 at Callaway-Jones Funeral Center. The funeral service will be held at 10:00 am, Tuesday, February 8, 2022 at Our Saviour’s Lutheran Church. Interment will follow at Bryan City Cemetery with Military Honors. Services are in the care of Callaway-Jones Funeral and Cremation Centers, Bryan-College Station.

Barry was born in Washington County (Hoddeville) on July 14, 1930 to Willie Blum and Lena Kochwelp Blum. He was baptized at Zion Lutheran Church on September 21, 1930 and was confirmed on March 25, 1945. On September 11, 1955, he married Florence Koehne at Prairie Hill Lutheran Church. They spent many weekends dancing at the local dancehalls and enjoyed taking their children back to Brenham every weekend to spend time with grandparents and cousins.

He served in the US Army during the Korean War then graduated from Blinn College with an Associate of Arts Degree. He was a farm equipment mechanic at International Harvester for more than 30 years before he became self-employed until retirement. Even in retirement, he was often sought out for his expertise in fixing a tractor or any other piece of farm equipment. There is a good chance he worked on every International Harvester tractor in Brazos County.

Growing up on the family farm instilled the work ethic that followed him through his career. He was a man of few words and led by example. He enjoyed fishing, especially on the Brazos River and at Lake Limestone with his family. During his younger days, he loved playing church league baseball and fast pitch softball in Washington County. He loved to watch baseball and always stayed loyal to the New York Yankees. He took many trips to Louisiana and Las Vegas to gamble and played many poker and domino games with his friends and family. Spending time with his family was very important to him and he never missed birthday celebrations, holidays, or any chance to visit with his brothers and sisters in Brenham. He was always present at extra-curricular activities for all of his children and grandchildren. One of his favorite hobbies was putt-putting around town in his white Ford truck checking on all of his family members and their properties.

He is preceded in death by his wife of 29 years, Florence, his parents, his brother and sister-in-law Harold and Neva Blum; his brothers Marvin and Earl Blum; brothers-in-law Clifford Heidemann, Fred Koehne, Ben Eickenhorst, Joel Murray, and Travis Rosenbaum.

In lieu of flowers, memorial contributions may be made to Our Savior’s Lutheran Church or a charity close to your heart.