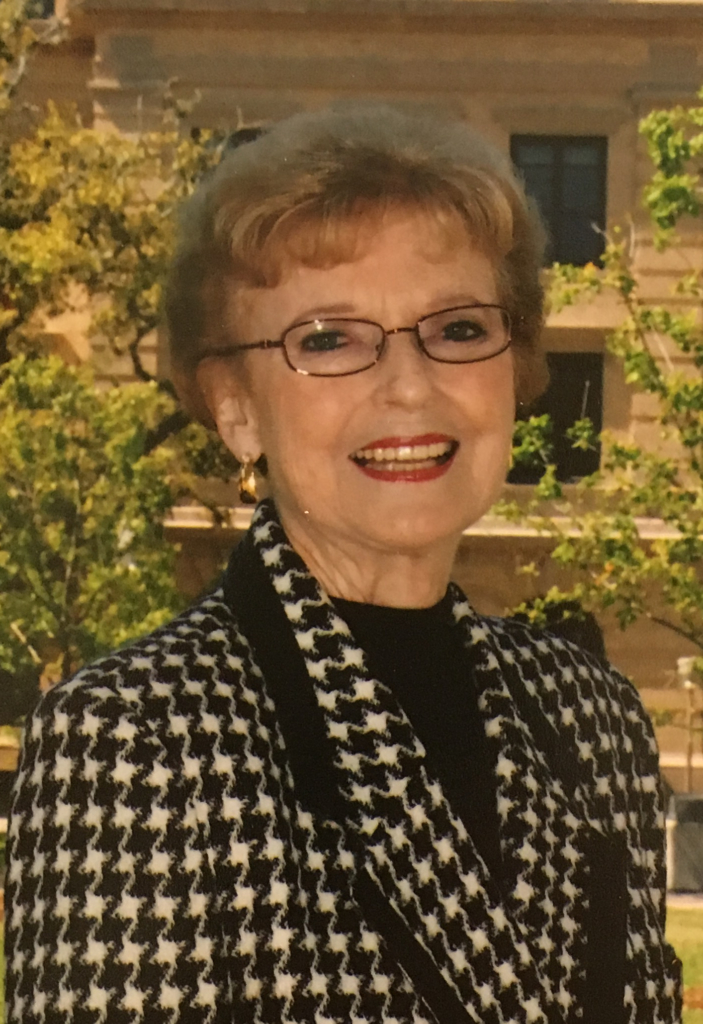 Dortha “Nelda” Green, 88, of College Station, passed away Friday, October 6, 2017 at her home. Nelda was born in San Saba County, Texas, the only daughter of David Lee Smith and Gladys Patton Smith. Her parents preceded her in death in 1955 and 1963 respectively. She was also preceded in death by her two brothers, David Lee Smith, Jr. and Gailyian Patton Smith and a great niece. Mr. and Mrs. Mark Oliver Patton and Mr. and Mrs. Elbert Smith were her grandparents.

Nelda graduated from San Saba High School in 1946 at age sixteen. Unable to attend a four-year college, she completed a year of business study in Austin, Texas and began her career immediately at the Texas Highway Department (now TXDOT). By age twenty she had become Administrative Clerk for Dewitt C. Greer’23, the State Highway Engineer. That began a career of more than forty years of assisting top administrators, including several presidents and chancellors of Texas A&M University and The Texas A&M University System, among whom were President James Earl Rudder ’32 and President/Chancellor Jack K. Williams. In 1974, she became the first woman to be named Assistant to the President of Texas A&M. Her greatest satisfaction came from working behind the scenes to provide the utmost assistance to her employers. To her colleagues, Nelda was determined, courageous and inspiring. She was a friend and mentor to many. Said one of her colleagues: “Nelda was approachable and treated everyone with fairness and with an even amount of respect. But her soft voice and sweet smile were always translated as a reminder that she and the President expect the best.”

A framed quotation in a private nook in her home reads: “This isn’t a dress rehearsal. We get one time around to be the best we can be.” In her quiet, competent manner, she lived by this motto.

Together with Harry J. Green, Jr. whom she married in 1980, her life was filled with service to others; and retirement did not mean rest. The two of them were active in fundraising for worthwhile causes, such as for the Veryl Goodnight sculpture, “The Day the Wall Came Down,” a focal point at the George Bush Library and Museum. They supported many organizations, including Texas A&M’s 12th Man Foundation, The Association of Former Students, and the Corps of Cadets, contributing to an Endowed Century Club gift and funding of an Earl Rudder Corps Scholarship. She and Harry were endowed scholarship members of the 12th Man Foundation. She was active for many years with the Friends of the Sterling Evans Library. Nelda had many interests, and she pursued as many as time permitted. She served as a resource person for Dr. Thomas M. Hatfield, author of the Earl Rudder biography, “Leader to Legend”.

As much as Nelda enjoyed her career, she enjoyed being a homemaker in the fullest sense of the word; and she took great pleasure in maintaining their many friendships. She will be remembered for her kindness to others and for her ready smile.

Nelda was baptized into the Christian faith in 1947 in Austin, Texas. Faith in God and belief in Jesus Christ were a central part of her life. She was an active member of First Presbyterian Church of Bryan.

Nelda is survived by her husband, Harry. She is also survived by two nieces, five nephews and several great nieces and nephews whom she loved and nurtured. She will be missed by them and by a host of friends, many of whom were considered as extended family.

Family and friends are invited to a time of visitation from 4 to 6 p.m. Monday, October 9, at Callaway-Jones Funeral Center, 3001 S College Ave in Bryan. A memorial service is set for 1 p.m. Tuesday, at First Presbyterian Church in Bryan, with Pastor Ted Foote officiating. A private burial will be in the College Station City Cemetery.