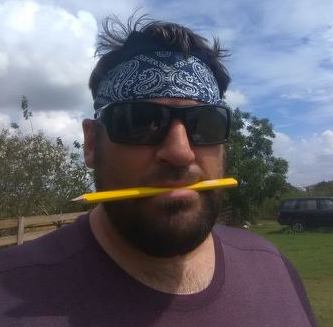 Ever forgiving and kind of heart, Joey Strong, 40, of Caldwell, Texas went to be with his Lord Sunday, October 8, 2017.
Joey was born to Terry and Becky Strong of Houston, Texas October 7, 1977. He was an avid sports fan growing up, playing soccer, baseball and football. His talents didn’t end there, he was also very artistically inclined, his ability to draw was nothing short of amazing.
As an adult, Joey used his ability to repair anything to become self-employed as a Remodeling Contractor. He was blessed to truly love what he did and be so talented at it.
Joey had many interests but his love to ride horses was at the very top of his list. He had a natural way with all animals, his love for anything on 4 legs was no secret to anyone who knew him. His range of hobbies went from fishing and riding horses all the way to cooking and antiquing.
Joey was the kind of man who never spoke a negative word toward anyone, his quick wit was something to be admired and his bear hugs where notorious to all those who loved him. To say he will be missed falls short.
Joey’s love for his family and friends was always felt and always understood, he made sure to say, “I love you” on a religious basis and express that love with one of his hugs. As anyone in his family would tell you, he was a true momma’s boy, he loved his mother Becky to no end, his voice asking, “Hey mom, what are you doing?’ could be heard throughout the house multiple time a day. Joey’s presence brought love and laughter to all those who were blessed enough to be graced by it.
He is preceded in death by three of his grandparents, his beloved step-dad Winston, Uncle Kevin, and Conrad.
Joey leaves behind his loving girlfriend Mae, and his Nanny, parents; Terry Strong and Becky Stroup, brothers; Jason, Corey, and Coy, sisters; Carrisa and Ally, Aunts; Sheri and husband Cecil, Cindy, Carrol, and Jan, uncles; Rob, Dennis, Jerry, Brian, and Randy. His nephews, nieces, and cousins; Bobby, Jenny, Chris, Danielle, Charity, Tiffany, Erica, Nicole, James, Austin, Kaleigh, Mason, Bella, Marcius, Mariah, Preslie, and Jacob.