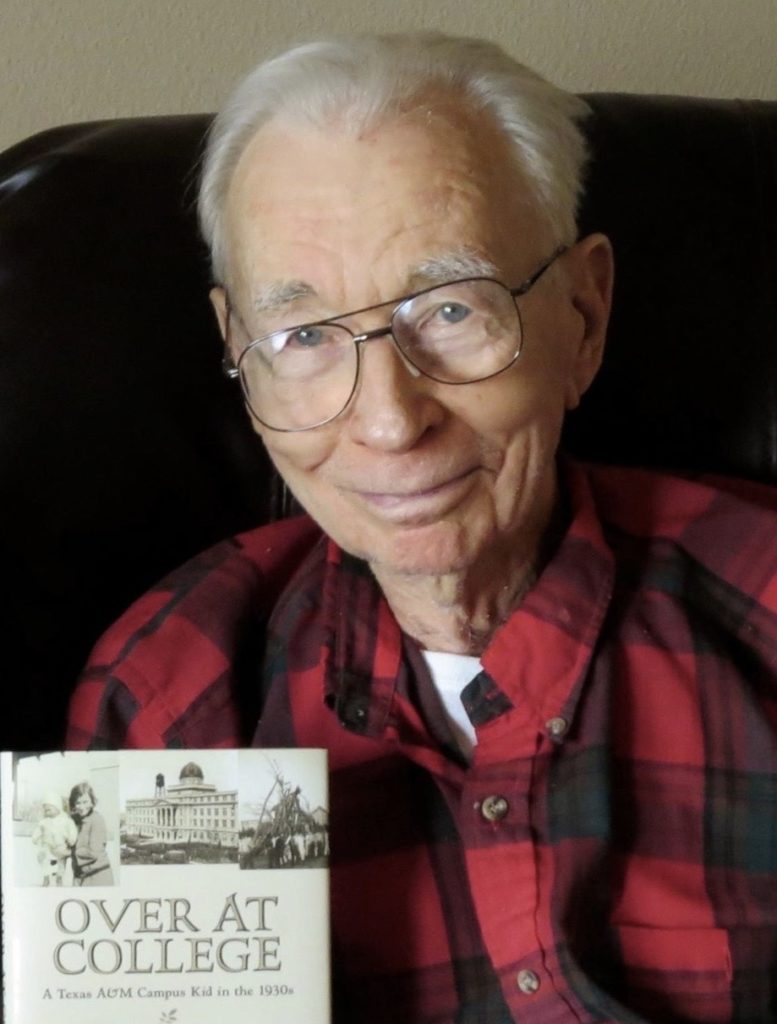 November 16, 1927 – May 2, 2020
James Knox Walker Jr., or “Knox”, as he was known to friends and family, passed away Saturday, May 2, 2020 from complications of a hip fracture. He was born on November 16, 1927 to Reba Dick Walker and James Knox Walker and spent his childhood living on the campus of the Agricultural and Mechanical College of Texas, where his father was Campus Engineer. Knox wrote of his childhood in the book, Over at College: A Texas A&M Campus Kid in the 1930s, which was published in 2016 by the Texas A&M University Press.

After graduating from A&M Consolidated High School, Knox was drafted into the Army before he could begin his studies at Texas A&M and was sent to Japan as part of the post-war occupation. Upon completion of his service, he returned to College Station where he earned his Bachelor’s and Master’s degrees in entomology from A&M.

Knox went on to serve as a professor in the Texas A&M Department of  Entomology until his retirement in 1993. He was named Professor Emeritus that same year. During his career, Knox’s research focused on the boll weevil, bollworm, and cotton fleahopper and the use of integrated pest management strategies to improve yield, increase profitability, and significantly reduce insecticide use in cotton production.

Knox was an avid sportsman, especially enjoying fly fishing on his beloved Llano River in the Texas Hill Country and birdwatching wherever he went. He also loved duck hunting, particularly in his retirement years when he would rise at 3:00 AM in order to claim the best Lake Somerville hunting spot before the arrival of other, much younger, hunters.

He was fond of music, particularly songs of Ireland, from whence his Scots-Irish ancestors emigrated. “Galway Bay” was a favorite. Knox was a lifelong Bing Crosby fan and had an encyclopedic knowledge of old movies. He could tell you who directed a film, what year it was released, and all of the actors in it. One of his greatest joys was spending time talking movies and Crosby with his younger brother, John.

Knox had a great appreciation of history, reading widely in that genre. He included much Great Depression era history in his book about growing up during that time. He loved words and language. One of his favorite pastimes was reading Webster’s Dictionary for fun and then quizzing his kids on new word meanings.

He was married to his wife, Pat, for 61 years. She died in 2011. Knox was also predeceased by his brother, John, and by a grandson, Jeremy Spies. He is survived by daughters and sons-in-law, Deborah and Ron Spies and Kelly and Gary Crane, and by daughter, Megan Walker. He is also survived by sons and daughters-in-law, Alex and Tammy Walker and Patrick and Rachel Walker. He leaves behind nine grandchildren and eleven great grandchildren.

Knox was a lifelong dog lover so the family requests memorial donations be sent to Aggieland Humane Society at 5359 Leonard Rd, Bryan, TX 77807 or online at aggielandhumane.org

A memorial gathering of family and friends will be scheduled and announced at a later date due to the current COVID-19 outbreak.