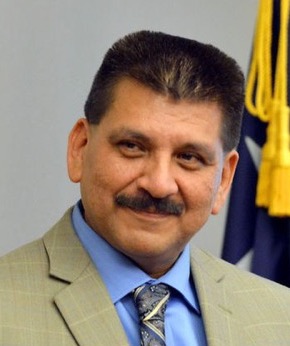 The true measure of a man is shown through his life’s journey, in the lives he’s enriched and the legacy of kindness he as given along the way.

George Aguilar has been accepted into heaven with our Lord on January 13, 2020 in Grapevine, TX, surrounded by his family. George was born Jan 12, 1958 in San Antonio Texas, to Policarpio and Delores Aguilar. Born into a military family, he grew up traveling across the United States and Germany with his parents. George graduated from Killeen High School in Killeen, Texas in 1976. He went on to attend Central Texas College and studied Criminal Justice. George lived a life of public service to his community, serving as a Jailer in Killeen, TX, a Corrections Officer in Huntsville, TX, which led to his dream job serving as a Police Officer in Bryan, TX for 34 ½ years. George started with the department in July 1980 as a patrol officer. In more than three decades, Aguilar served on patrol, as a detective and a school resource officer where he was a canine handler for the DARE Program. He was awarded six commendations during his career, as well as a citation and obtained a master peace officer’s license. After his retirement from the Bryan Police department in 2015, he went to work for the Brazos County Associate Courts, as a bailiff until his passing. George always had a smile on his face, a wry sense of humor, loved to dance and listen to Gary Hobbs, go bike riding and was a die-hard Dallas Cowboys fan. He attended every home game (Dallas vs Packers) since 2007 with his son who is a Packers fan.

His parents, Policarpio and Delores Aguilar; a brother, Arturo Aguilar; sister, Rachel Aguilar-Kluck; and a niece, Kendra A Ward, precede George in death. He is survived by three sons Nicolas of Nevada; Michael of California and Gregorio Aguilar of Bryan, TX; his fiancé, Florencia Lerma of Grapevine, TX; a sister, Fatima Aguilar-Ward of Schertz, TX; a brother. Policarpio Aguilar Jr. of Austin, TX; seven nephews, one grandnephew, three grandnieces and three in-laws, Guillermina Aguilar, Garrett Kluck Sr. and Brad Ward.
There is a saying that goes: ‘When all is said and done, if you can count all your true friends on one hand, you’re a wealthy man.’ With so many friends from school (going back all the way to Junior High), Bryan PD and those he met along the way, it is safe to say that George is truly a wealthy man.

The family will begin to receive guests during visiting hours from 11 am until the time of service at 1:30 pm, Friday, January 17, 2020, at the funeral home. Interment will follow in Rest-Ever Memorial Park. Services are in the care of Callaway-Jones Funeral and Cremation Centers, Bryan-College Station.