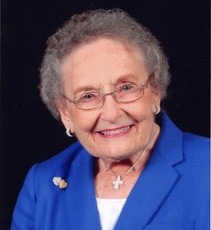 Florence Catherine “Kitty” Harrington was called home to be with her heavenly father Tuesday afternoon, May 5, 2020. She had fought the good fight and finished her race. She was 90 years old.

Kitty was born to Rader and Martha Elizabeth (Anglin) Blansit on February 7, 1930, in Hamilton, Texas. She was an only child but spent her early years alongside numerous cousins who were as dear to her as any sibling could be. During her youth, you could find Kitty riding through the family farm on her horse or reading every book she could get her hands on. Her thirst for adventure and knowledge began at an early age and continued throughout her life.

Kitty graduated valedictorian of Hamilton High School in 1948. The following year, she attended McMurry College where she majored in English. It was during her freshman year that she met Glenneth Harrington, her soul mate and the love of her life. After graduating with honors, Kitty yearned for an adventure. She spent a year teaching in Corpus Christi, enjoying her evenings and weekends on the beach. Following her year of independence, Kitty married Glenneth on June 18, 1953, and spent the next 66 years of her life as a devoted wife and mother to their three children.

Shortly after they were married, Kitty accompanied Glenneth to Dallas, where he began seminary at Southern Methodist University. She supported his call to the ministry by typing his term papers late into the evenings on her Royal typewriter and acting as a sounding board as he prepared his sermons during those early years. After Glenneth’s graduation and ordination into the United Methodist Church, Kitty excelled in her role as a pastor’s wife and partnered with him in ministry for over 40 years. Kitty taught Sunday school classes, Bible studies, and hosted congregation members and friends at their home on countless occasions.

Outside of her role as a pastor’s wife, Kitty was a loving mother. Although she left her position as a  teacher prior to the birth of her first son, Kitty was a lifelong educator and devoted herself as a stay at home mom, playing an active role in her children’s education and all of their activities and involvements. She continued to share her passions and interests with her grandchildren, exposing them to art, culture, and diverse experiences every chance she had.

Kitty loved to cook and bake and especially loved sharing her creations with family and friends. She also loved to travel and treasured her opportunities to see the world, with Glenneth always by her side. When asked what her favorite trip was, Kitty’s answer was never the same. She loved to recant her memories and experiences, including climbing Mount Sinai on her 60th birthday, retracing the steps of biblical figures through the Holy Land, and losing track of time in the ruins and monuments across Europe.

Due to the restrictions associated with the COVID-19 pandemic, a private interment service will be held in Hamilton, Texas. A Celebration of Life for family and friends will be scheduled at a later date in Bryan, Texas.

Kitty was immensely proud of all of her children, grandchildren, and great-grandchildren’s accomplishments and passions. Therefore, in lieu of flowers, the family is requesting memorials be made in Kitty’s honor to Hearts for Hearing, 11500 N Portland Ave, Oklahoma City, OK 73120, an organization near and dear to her and her granddaughter’s heart.