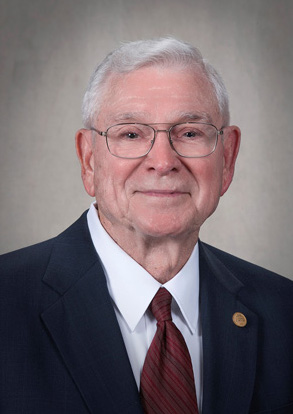 Joe Earl West was the oldest of five children born in Woodward, Texas, to Joe C. West and Jozie Oakes West. The family would soon include brothers Robby, Dale, and Milton, and sister Mary Lee. They lived on the farm their father ranched, growing up during tough economic times, but surrounded by love. When Joe was 15, his 14-year-old brother Robby died.  The family decided on a new life start in Cotulla, Texas as his father gave up farming and took a job as a mechanic and his mother became a very popular teacher’s assistant at the elementary school level.

In high school, Joe’s agriculture teachers had a major influence on him, as they had been Texas Aggies and part of “Ol’ Army” themselves. There was much talk of Aggieland and the best school in the world that young Joe would grow up hearing. As high school graduation approached, by early 1950, Joe decided he just had to check out Texas A&M College for himself. So, he set out on a very long bus ride from South Texas, one that included changing buses in San Antonio, and then making numerous stops along the way. Joe didn’t arrive in College Station until very late in the evening.

He tried to get a room at the Aggieland Inn but learned there were no vacancies. Weary and exhausted from his travels, the dejected look on his face spurred the front desk clerk to say, “Wait just a moment. Let me make a call.” Ten minutes later a late model sedan pulls up at the Aggieland Inn, and Aggie Veterinary Medicine professor Dr. Hal Redmond and his wife said, “Get in young man. We’d like you to be our houseguest this weekend during your stay in Aggieland.” Those who’ve lived long in College Station or grown up here will recognize the Redmond last name as in the Redmond Terrace part of the city.

That current to future Aggie kindness set into motion a chain of events that would come to impact the lives of so many in the future. Joe was so impressed in A&M and the Corps of Cadets. At that time in 1950, the student body was 50-50 actual Corps members and the other half of what was between 6,000-7,000 students were veterans of World War II who’d returned to complete their academic credentials. Brothers Dale (’57) and Milton (’61) would join A&M for their studies, so Joe recruited his first two Aggies straight out of his childhood home.

Joe became part of Squadron 8 as well as the Fish baseball team. Even though he used much time for academics, he also took time to be a Senior Yell leader. Joe graduated with his DVM degree from the Aggie School of Veterinary Medicine. He completed a one-year internship in Skokie, Illinois before he was commissioned into the USAir Force Veterinary Corps in 1957. A good student, he would go on to the University of Rochester, where he earned his M.S. degree in radiation biology. His first marriage had ended in divorce but he had two children, Katherine and Gary, from that union. His next academic stop would be in Davis, California, where he enrolled to study for his PhD in Comparative Pathology.

It was there at the University of California, Davis, that Joe’s life would change forever. A brilliant man, Joe was dedicated to his studies and was able to manage large class loads each semester. Most of the time, he kept his head down, until one day he didn’t. There at the College of Veterinary Medicine, Joe spotted a lovely and talented microbiologist whose frequent path to the laboratory downstairs to check out ethanol for her research placed her in view sufficiently often to make Joe find out her private lab phone number.

One day that phone rang and there was this Dr. West inviting Miss Carolyn Francis for 10 am coffee; she couldn’t make the 10 am, but she countered suggesting the 3pm break. They agreed. But Carolyn, like all good scientists was mid-experiments and waiting on a centrifuge to complete its work, which put her re-arrival back at the coffee spot at least 10 minutes late, only to find no Joe West there upon her return. Thinking he had been stood up, he had not waited. It was then she learned his motto, “If you’re not early, you’re late!”

In Sacramento, it only took a few dates before the couple knew they were in love. The first night he pulled up outside the home she shared with some girlfriends in Davis, the car pulling into the driveway (spotted by her roommate) signaled that he was definitely not a classic, carefree bachelor. Instead the station wagon had all the markings of previous marriage and “Dad” all over it. But he took his “Carrie” to an operetta in Sacramento and to lovely dinner evenings.

That same semester they began dating in September, Joe proposed to Carrie and they were married at semester’s end. He was simultaneously getting ready for his oral examination to qualify for his doctorate. His major professor was understanding about love at first sight, and allowed Joe to delay his oral exam until returning from his honeymoon.

Joe was in the military and he received orders to leave before finishing his PhD thesis. The couple spent a memorable New Year’s Eve cleaning out his office there so they could report to his assignment in Washington, D.C. Carolyn had always been close to her family in California and he was taking her clear across the country. All veterinarians were in the Veterinary Corps because at that time they were sending dogs to the moon, studying space/radiation effects.  Joe taught radiation biology, his passion, to all the new dentists, doctors, and veterinarians at that time.

All military branches were concerned about the atom bomb and fallout. Joe bravely travelled with the medical Inspector General team and health science officers. He was promoted to Colonel. The West family, now including children, April and Jeremy, traveled the world together thanks to his job. They lived in a high-rise apartment in Germany; Joe took leave every chance to be with the family and see the countries as they should be seen. Other times, he and Carrie would get away together with the children being lovingly looked after by a network of military friends who took turns in their “neighborhood” to be there with and for the children.

While in the Air Force, Colonel West earned many distinctions, including the Air Force Commendation Medal, the Meritorious Service Medal with Oak Leaf Cluster, and the Legion of Merit Award. He was also a consultant for the Air Force Surgeon General. He retired from service after a storied 22 years.

In retirement, he’s served as the Past President of the TAMU Yell Leaders Association and as a Faculty Advisor to the Corps of Cadets (later elected to the Aggie Corps of Honor) and was the Speaker at the 2001 Aggie Muster ceremony in College Station. Another highlight was Joe and Carolyn were given the honor of looking after Miss Reveille V at their home after her retirement until her passing. She had once been queen of Aggieland but in College Station she was one of five beloved animal members of the West family; Joe retired from the Texas A&M System after 18 years.

Carrie and Joe enjoyed 52 loving years of marriage. They were an active part of A&M United Methodist church. They loved interacting with the College Student Class and served as mentors there for many years. One year a senior pastor who was also an Aggie, asked Joe to come up in front of the congregation and lead them in some Aggie yells; ever the Aggie—Joe complied.

Daughter April said of Joe, that people would always come up to her and say, “Your dad is so nice, genuine, sweet,” and she would reply, “He really is that way all the time.” Her beloved father was often heard to say, “God bless and Gig ‘em” as well as “Keep the Faith.”

Joe himself said, “Being in the Corps as well as in a different academic major, I had to rely on the ‘man upstairs’ well beyond myself, so that has served me well. And the Aggie Code of Honor, I would say that has been one of the greatest things in my life, and I would recommend that it would serve everyone well in their personal and professional lives.”