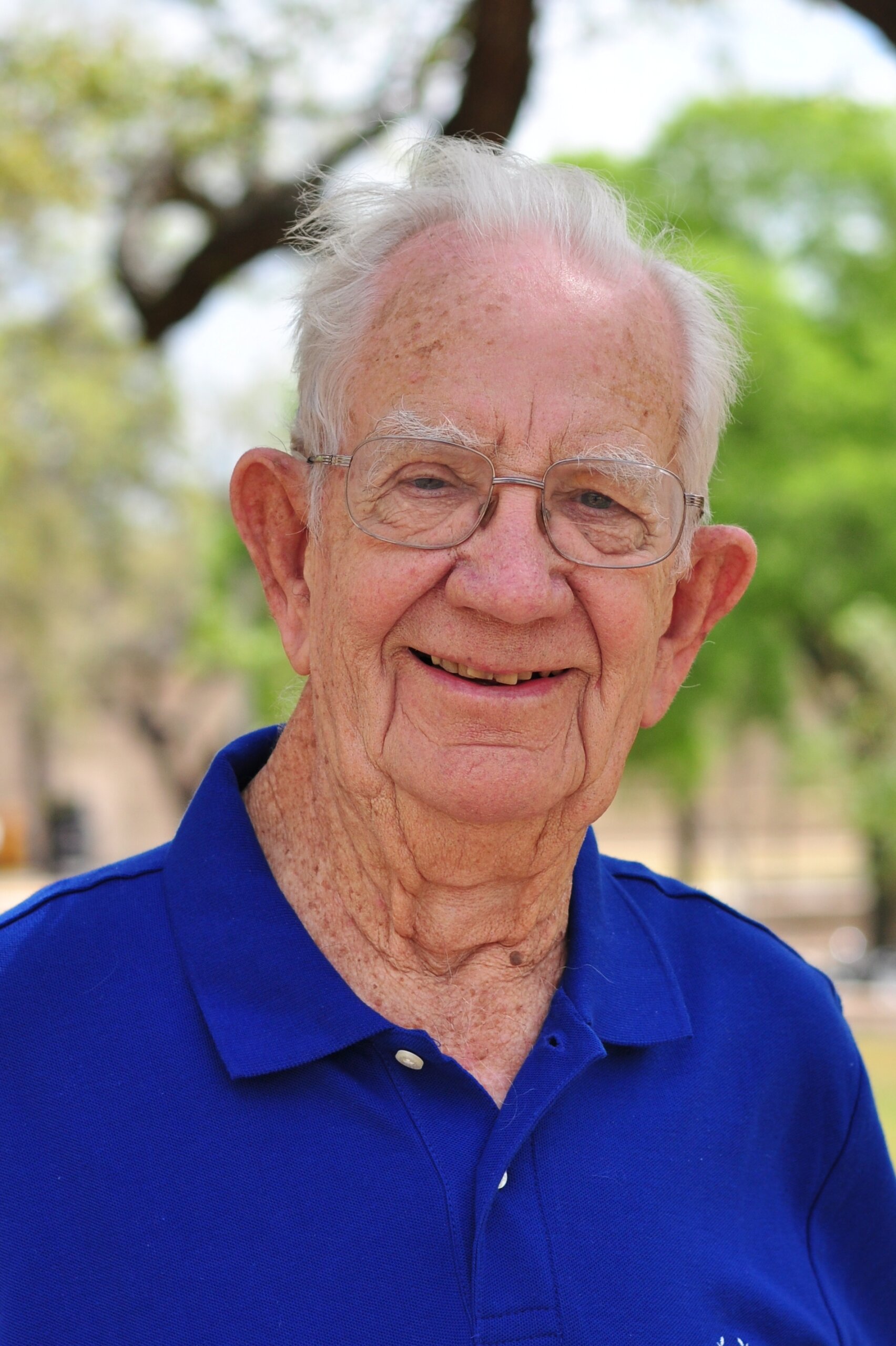 After 93 years of exemplifying love and faithful service to others, Reuben B. “Mac” McDonald, Jr. passed away Thursday, March 31, 2022, at Crestview Retirement Center in Bryan, Texas, surrounded by his devoted family.

R.B. was born in Mart, Texas, on December 15, 1928. He was the youngest of three children born to Velma and Reuben B. McDonald, Sr. His parents instilled a strong faith in God in their children as they worshiped regularly in the Methodist churches wherever they lived.

Raised on the family’s cotton farm, young “Mac” had a talent for making anything grow. He enrolled in Texas A&M University, Class of ’51, but left for a time to work the farm when his father became ill.  He graduated from A&M in 1953 and accepted his first career job as a Soil Conservationist with the U.S. Department of Agriculture in Cameron, Texas. Soon he met a beautiful young high-school English teacher, Mary Jo Boyd, at a Halloween party and married her on June 28, 1955.  They made their homes primarily in San Marcos, New Braunfels, and Liberty, Texas, and worshipped at their local Methodist Church with their four children, Jon, Carol, Monika, and Doris. Throughout their married life, they embodied the Methodist pledge of time, talents, gifts, and service, as they faithfully served their church and their community.

Mac was an active member of the Lions Club for over 63 years, distinguishing himself in each office he held. He was named “Lion of the Year” five times for his work with the Liberty Lions Club. Mac also served as Deputy Director of Lions Club Region 8 and was awarded the prestigious Melvin Jones Award sponsored by Lions Club International. In 1996, Mac and neighbor Arthur Brummett co-founded the ”Flags Across Liberty” program through the Liberty Lions Club, primarily to raise scholarship funds for local students. By 2013, the program surpassed 1,200 American flags that flew outside homes and businesses six times a year and had funded more than $350,000 in scholarships, and proudly continues today. In 2010, Mac was named Liberty Citizen of the Year by the Liberty-Dayton Area Chamber of Commerce, primarily for his service to the Liberty Lions but also for being a long-time volunteer with the Spirit of Sharing, Hunger Busters, LifeShare Blood Center, Boy Scouts of America, and Hightower Prison Visitor Center.   He was also a 67-year Mason and was a member of Liberty Masonic Lodge #48.

After retiring from the USDA-SCS in 1988, Mac worked for dear friend John Hebert, who owned Hebert Distributing— a job that kept him busy until Mary Jo’s retirement as a high-school librarian.  As a former farmer and a lover of all trees, Mac operated “Shade Tree Farms” on 60 acres in Moss Hill, Texas, specializing in live oaks, pin oaks, and crepe myrtles.  He was an avid gardener and took pride in the fruits of his labor. Mac also enjoyed woodworking and, together with Mary Jo, was a lifelong antique collector. Texas A&M was always near and dear to their hearts and he and Mary Jo funded three Endowed Opportunity Award Scholarships with the Texas A&M Foundation.

Mac was predeceased by his parents, his sisters, Mackie McDonald and Margree Steiner, and brother-in-law, Otto Steiner. Survivors include his wife of 66 years, Mary Jo, and children, Jon McDonald and wife Debra of Lake Jackson, Carol Jones of Bryan, Monika McDonald of The Woodlands, and Doris Light and husband Tim of Bryan. Five grandchildren survive him: Jessica Dent and husband Ryan of Angleton, Texas; Jason McDonald and wife Connie of Lewistown, Montana; Krista Donatoni and husband Matthew of Long Beach, California; Timothy Light and wife Virginia of New York, New York; and Taylor Light of Houston, Texas. Five great-grandchildren also survive him: Hannah, Tucker, Kaden, Lucy, and Faye.  Mac was also loved well by numerous nieces, nephews, and friends, including many from the Crestview Community.