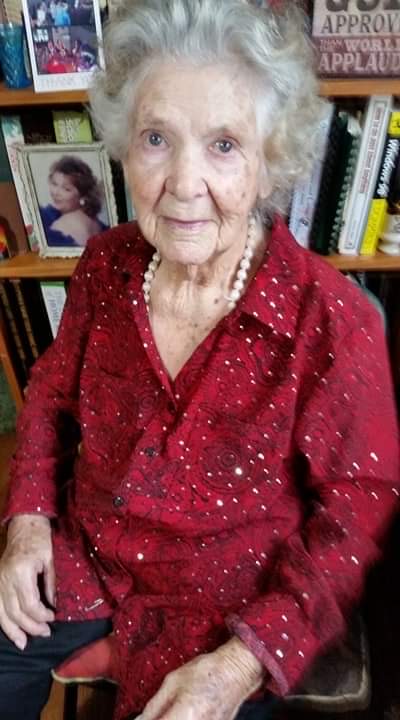 Ola Mae Faulkner Jackson, age 103, passed away Friday morning at the home of her grandson Bryan Smith. Her son Gary Smith and her daughter Brenda Gould were at her bedside when she went to meet the Lord. For the last few weeks of her life, she was being lovingly cared for by her great granddaughter, Sailor Smith.
Services will be held Monday May 23, 2022 at 9:30 a.m.
Interment will be at Smithwick Cemetery, Marble Falls Texas at 2:30 p.m.
Services will be provided by Cozart Funeral Home, 220 Heath St. Normangee Texas.

Ola Mae was born in Normangee, Leon County, Texas. Her father Alton A. Faulkner and her mother Minnie Ola Batson Spillers were married in Leon County. When she was younger, she hunted with her brother Floyd. She was an excellent shot. She had three sons and two daughters and worked very hard to provide for her children. Her oldest son was born in 1943 and the youngest in 1956. She cared for her mother and raised a grandson, Bryan, in addition to her own five.

Ola Mae was a natural born caregiver. She worked well into her 80’s saying that someone had to take care of the old people. Old or young she gathered people up like she gathered up her chickens and cared for them. She loved to quilt and admired Aunt Effie Batson’s tatting. But being outside in the yard was a passion for her. She could plow a straight furrow with a hand plow that was amazing to behold in her small neat garden.

Grandchildren was another one of her passions. There seem to be a grandchild or great grandchild some where near a great deal of the time.

She was greatly loved and will be missed as much.