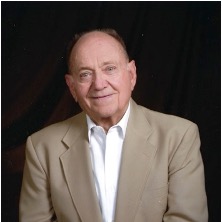 Melvin R. Morgan, 91, of Bryan, Texas, peacefully entered the Gates of Heaven in the early morning hours of Wednesday March 9, 2022.  He passed away in CHI-St. Joseph Regional Hospital in Bryan, with his daughter holding his hand.  A special niece, Sherri (Lawrence) Boster, also stood lovingly by his side.

Friends and family are invited to his Celebration of Life at 3 pm on Saturday, April 2, 2022, at Callaway-Jones Funeral Center in Bryan, with Pastor Tim Skaggs officiating.  Visitation will begin at 2 pm.  Interment will immediately follow the service at Rest Ever Memorial Park Cemetery in Bryan.  Services are in the care of Callaway-Jones Funeral and Cremation Centers of Bryan-College Station.

Melvin was born January 31, 1931, in Port Lavaca, Texas, to Jewell and Emma Morgan, and was the third of their nine children. He was baptized at the age of 14 at College Avenue Baptist Church of Bryan, now Central Baptist Church.  He attended Gause Elementary School in Gause, Texas, Lamar Jr. High School in Bryan, Texas, and graduated in 1948 from Stephen F. Austin High School in Bryan, Texas.  He then enrolled at Texas A&M University as a proud member of the Class of 1952.  After temporarily leaving college to serve 4 honorable years in the U.S. Navy during the Korean War, Melvin graduated in 1957, with a Bachelor of Science Degree from Texas A&M University.  He was also a Master Mason, belonging to the Adam Royder Lodge of Wellborn, TX since 1960.

Melvin met the love of his life, Jewell “Winell” Fleming, in Milton, Florida, while serving in the U.S. Navy at Whiting Field in Pensacola, Florida.  They were married at the First Baptist Church of Milton on April 22, 1953.  They made their home in Norfolk, VA, where Melvin was stationed at the naval air base.  After completion of his naval service, Melvin and Winell moved back to Texas.  Settling in Bryan, they were blessed in 1956 with a daughter, Karen, and in 1960, with a son, Tim.

Following his graduation from Texas A&M, Melvin was employed at Alenco Manufacturing in Bryan and Monsanto-Chemstrand in Pensacola, FL.  He later worked with his brother, Arnold, building houses in the Houston area, before branching out to form his own successful custom-homebuilding company, Mel Morgan Construction, Inc., in the Conroe, Texas area.  He was a member of the Lions Club in Conroe.  During the ‘80s, he was employed as the Director of Building & Maintenance for Conroe I.S.D.  In the late ‘80s, Melvin and Winell moved back to Bryan, to be closer to their grandchildren.  He continued in the construction business, building and re-modeling homes in the Bryan-College Station area, eventually retiring there.

In lieu of flowers, the family requests any donations in Melvin’s memory be made to either St. Jude Children’s Research Hospital at www.stjude.org/donate or to Shriners Hospitals for Children at https://lovetotherescue.org.