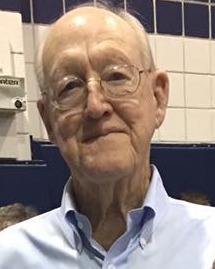 Jack Millender passed away peacefully in his sleep on January 2nd 2022.  Services will be held on Tuesday, January 11th beginning with a visitation at 1:00, followed by a 2:00 service at Callaway Jones Funeral Home, 3001 S. College Avenue, Bryan, Texas 77801.  Immediately following the service will be a graveside burial at the Aggie Field of Honor Cemetery, and then a reception at Pebble Creek Country Club.

Jack Millender was born in Houston, Texas in 1930 to Alice Winston Millender and Lawrence Quinlin Millender.  He was raised in the Houston Heights area and attended Reagan High School, where he graduated in 1948.

He then attended the A&M College of Texas (Texas A&M University), and graduated in 1952.  When he graduated, on the same stage he received his diploma, commission, and orders for Korea. Jack served his country as a forward observer in the Korean War in 1953 – 1954. While in Korea, he was promoted to first Lieutenant and also awarded the Bronze Star for risking his own life and saving the lives of the men in his unit.

In 1956 he married the love of his life, Mary Jane Garrison.  Together they would raise three sons, Mark, Paul, and Kirk. They also had eight grandchildren, and six great grandchildren.   In 1974, along with a business partner, Jack and Mary Jane began an office coffee service, “Ag-Horn Coffee.” Two years later, they moved to San Antonio to expand the business, up until their retirement in 2002.  Jack lived out his remaining years in College Station, visiting friends, serving as a class agent for the class of ‘52, volunteering for the A&M athletic office, and also St. Joseph’s hospital.  Also, he attended almost every sporting event while he was able.  “If there was a ball involved, he would have tickets.”

Jack is survived by his wife of 65 years, Mary Jane Millender; his sons, Paul Millender, Kirk Millender and wife Suzanne; along with his grandchildren and great-grandchildren.

In lieu of flowers, the family has asked that donations be sent to Aggieland Humane Society – www.aggielandhumanesociety.org or, Austin Boxer Rescue – www.austinboxerrescue.com