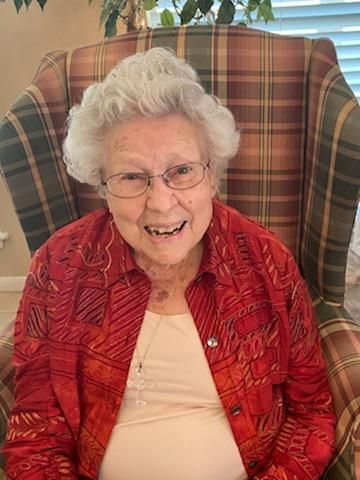 Geneva (Judy) Durham Blackburn transitioned to her Heavenly Home on February 21, 2022. She was born in Slidell, (Wise County), Texas on April 21, 1921, to Page and Dora Durham. She was married to Clarence Blackburn in 1939. Geneva was a survivor of breast cancer and melanoma. Geneva was 100 years and ten months old at her passing. In April 2021, there was a festive party for her 100th birthday.

Geneva was the youngest of five children. Her father died when she was two years old, and her mother moved to Lubbock to work for Texas Tech a few years later. She spent most of her life in Lubbock until moving to Spring, TX, to be close to family. She was a graduate of Lubbock High School and Texas Tech where she earned a B.S. in Education. She taught second grade in LISD at Hodges and Haynes Elementary Schools for 22 years.
Geneva was honored locally for her many hours of volunteer work in Meals on Wheels, Ronald McDonald House, and University Medical Center. She received the Governor’s Award for Outstanding Volunteer Service from Governor George Bush in 1995. She enjoyed making pecan pies for the families at Ronald McDonald House with pecans from the trees in her yard.

Geneva was a charter member of Highland Baptist Church where she was active in activities and missions of the church.

Geneva was preceded in death by her husband, Clarence Blackburn, her son, Joe Bob Blackburn, her grandson, Kelly Dale and his wife Cathy Dale. Her sister, Doris Bines and their three brothers, G.W. Durham, Roy Joe Durham and Page Durham also preceded her. Geneva was the last of the siblings from both sides of her family.
Surviving family members are daughter Ann Dale of Spring and grandchildren Kari (Shane) Blenderman of Spring, Chris Dale (Kristin) of Kyle, TX, Megan Sullivan of Katy, TX, and Amanda Hafner (Daniel) of Katy. She has nieces and nephews in Lubbock, as well as Colorado, Utah, Oregon, Oklahoma, Virginia, and California. There are six great- granddaughters and two great- grandsons as well as one great- great- grandson in Texas who loved to come visit her. She was dearly loved by family and a wealth of friends and neighbors who became like family.

To honor her spirit of giving and her passion for education, her body was donated to Texas A&M for research. She will be buried with her husband at Resthaven in Lubbock at some time in the future.

In lieu of flowers, the family suggests memorial donations to Ronald McDonald House of the Southwest at 3413 10th Street 79415 in Lubbock, TX, for their continued outreach to families with children in the hospital. Online donations can be made at https://rmhcsouthwest.com.