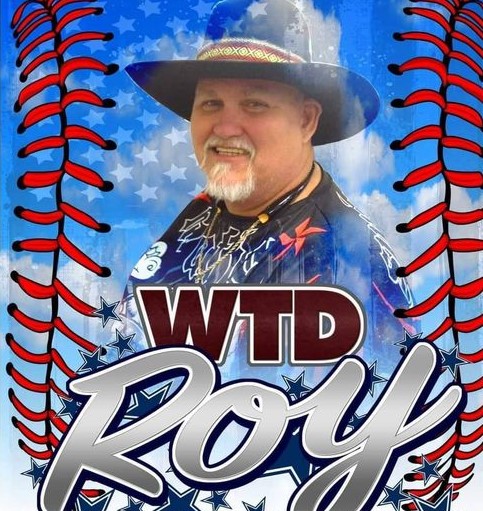 Alton Roy Dean of Bryan, Texas made his final journey HOME on August 22, 2021 surrounded by family after a short battle with liver disease.  He was in St Luke’s Hospital in downtown Houston, Texas where he was waiting for a liver transplant.  He was 61 years young.

A celebration of life will be held on Saturday September 18th, 2021 11am at Callaway-Jones Funeral Home.  Please feel free to wear your softball jerseys or anything Dallas Cowboys or Aggies to the service at the funeral home.  Once the service is complete we will head out to BRAC (Bryan Regional Athletic Complex) for a day of softball and sharing memories of Roy!

Roy was born December 9th in San Antonio, Texas at Lackland AFB to Alton and Rosemarie Dean and was the fifth child born into the family.  He would remain the baby of the bunch until his younger sister would arrive 11 years later.

Roy was born into a military family which allowed him to live in different areas such as Germany, Washington State, California and back to Texas.  He was a graduate of Bryan High School where he played football and baseball.

Roy was a plumber by trade.  He started out working for Earl Robinson at Robinson Plumbing.  He then moved to Moore Supply and would later work for Bryan ISD.  Roy had also worked for the City of Bryan Parks and Recreations working the softball fields and Texas A&M Athletic Dept where he worked the gates at the home football games.

Roy worked for Lone Star Softball for more than 30 years where he was Greg’s right hand man.  He was gone nearly every weekend working softball tournaments often missing birthday parties, graduations or any family gathering.  From League City to Mansfield or wherever the next tournament would be held…you could find Roy Dean in the trailer.  Even though he would miss functions, he was probably the happiest at the softball fields!  He lived and breathed softball.  He would often cook hot links for the umpires.  He was known for taking summer sausage and cheese, beef jerky, candy and whatever else just so he could share with everyone.  He never met a stranger!  Roy met a lot of people through softball and you can guarantee he remembered every single person’s name!  EVERY SINGLE ONE OF THEM!  The softball community would become Roy’s second family.  He was very well known throughout the softball community and was VERY loved!!  Roy was also known for having his big rings on nearly every finger!  He was honored and proud of being inducted into the USSSA Hall of Fame.  He was proud of that ring along with his Budweiser State Championship ring and Lone Star Softball ring.

He loved sports…ALL sports!  Basketball, Baseball, Softball and Football!  Dallas Cowboys were his team!  Win or lose, you could catch him “talking smack” on Facebook, text messages, or in person.  He was a die-hard fan for sure.  Once you got him stirred up, he would start calling out stats LOL.  He also loved his Fightin’ Texas Aggies!  His baby sister would often tease him about the Aggie War Hymn being his motivational music.

Roy also loved to play poker, sing, dance, listen to music and spend time with family and friends.  He loved to be the jokester and keep people laughing.  He didn’t like confrontation.  He wanted everyone to be happy go lucky…just like him.  He was there if you needed advice or if you just needed to vent.  Roy was the person to give you the shirt off of his back if you needed it.  He was Santa at our family Christmas gatherings.  He would also make an appearance elsewhere as Santa.  When Roy was home and had down time, you could often find him playing his video games.  And you could also find him sitting on the counter at the pawn shop hanging with Kenny and the fellas watching for the next great deal of the century. LOL  He actually knew every worker at every pawn shop from one end of Texas Ave to the other.  And if he saw something he thought you may want or need…you could definitely expect a phone call.

Roy was a son, brother, uncle, cousin, nephew, friend, brother-in-law, dad and poppy.  He did all of these with pride and most of all with love.  Roy was ALWAYS a giver and was NEVER a taker.  He was loving, kind, loyal, trustworthy, thoughtful, forgiving, caring and had a heart and smile as big as Texas!  Roy will be remembered the most for his strength and his will to fight.  He fought until he took his very last breath.  He was definitely NOT a quitter.  And you can “WTD” write that down!

Roy is preceded in death by his parents Alton and Rosemarie Dean, niece Rochelle Dean, nephews Wesley Batson and David Castillo and an aunt Dora Henry.