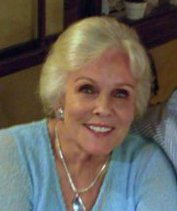 Anneliese T. Cofer died peacefully at her home on Tuesday, September 26, 2017. Anneliese was born on February 17, 1933 in Luckenwalde, Germany to Elisabeth and Karl Tietze. Her father, a photographer, instilled in Anneliese the love of photography and music. She mastered five instruments: piano, saxophone, violin, flute and accordion. Her love and appreciation of the arts was unquestionable.
In 1949, at the age of sixteen, Anneliese left Russian occupied Luckenwalde and entered the Lette-Haus School of Fashion Design in West Berlin. She graduated in 1952, and thus began her lifetime interest in fashion, art and photography. While in West Berlin, she also met her future husband, D. Brooks Cofer, Jr., an officer in the military intelligence. The couple married on July 3, 1953. After Brooks was released from active duty in September, 1953, Anneliese and Brooks returned to his hometown of College Station, Texas, where they raised their three children, Andreas “Ken”, Annette and Anne Marie. Anneliese devoted her life to her children and their activities: cycling, horseback riding, and tennis. Her devotion to her family continued with her grandchildren. Anneliese was immensely proud of them all and one of her greatest joys was being able to spend time with them.
Although Anneliese maintained her proud German heritage, she received her United States Citizenship on May 31, 1957, and, in 1972, was awarded the Americanism Medal by the La Villita Chapter of DAR for trustworthiness, service, leadership and patriotism. Remembering how difficult it was to relocate to a new country, Anneliese always welcomed the new German brides in this area to her home. She made them all feel welcome and part of a new community. In 1989, Anneliese returned to Germany to celebrate the fall of the Berlin Wall and again in 2009 for the 20th Anniversary.
Anneliese actively supported the March of Dimes, Stage Center Community Theater, St. Joseph Auxiliary Pink Ladies, Chi Omega Mother’s Club, OPAS and Brazos Valley Chorale.
Anneliese enjoyed photography (she had her own dark room), square dancing, snow skiing, hiking, traveling and gardening. Her garden and deck were featured in Southern Living Magazine and her home was one of the first on the Garden Home Tours in 1970. The Cofer home remained a focal point for entertaining after Aggie football games, holidays, anniversaries, birthdays and her festive New Year’s Eve Party. Her love for style and architecture can be seen in her home and her daughter’s law office. A close family friend, Brett Vance best described Anneliese: “She was my inspiration in life. She instilled in me the lifelong passions that remain to this day of photography, love of design, art, architecture and detail in everything you do.” Anneliese touched the lives of many and her spirit and enthusiasm will be missed.
Anneliese was preceded in death by her husband of 59 years, D. Brooks Cofer, Jr. She is survived by her children and their families: Ken and Val Cofer and daughter Lauren Curtis; Greg and Annette Scarmardo and their children, Audrey Arledge, Joe and Susanne Arledge and son Timothy Wade, Wade Brooks Arledge and Saxon Schell; Art and Anne Cofer McKellar and their children, Meagan McKellar and Gibby Sawtelle, IV and Jackson McKellar and Katelyn Powell. She is also survived by her brother-in-law and sister-in-law Frank and Laetitia Haines of Houston. For the past several years, Anneliese enjoyed the friendship of her companion Steven Stuart. Her loyal dog, Rusty, remained by her side.
A celebration of life will be held on Saturday, October 21, 2017 at 11:00 a.m. at Callaway Jones. The family will be present at 10:00 a.m. to greet Anneliese’s friends. In lieu of flowers, the family requests that contributions by made to Brazos Valley Chorale, P.O. Box 10644, College Station, Texas 77842, Aggieland Humane Society, 5359 Leonard Rd., Bryan, Texas 77807 or to a charity of one’s choice.