Women’s History Month Reminds Us to Say Thank You 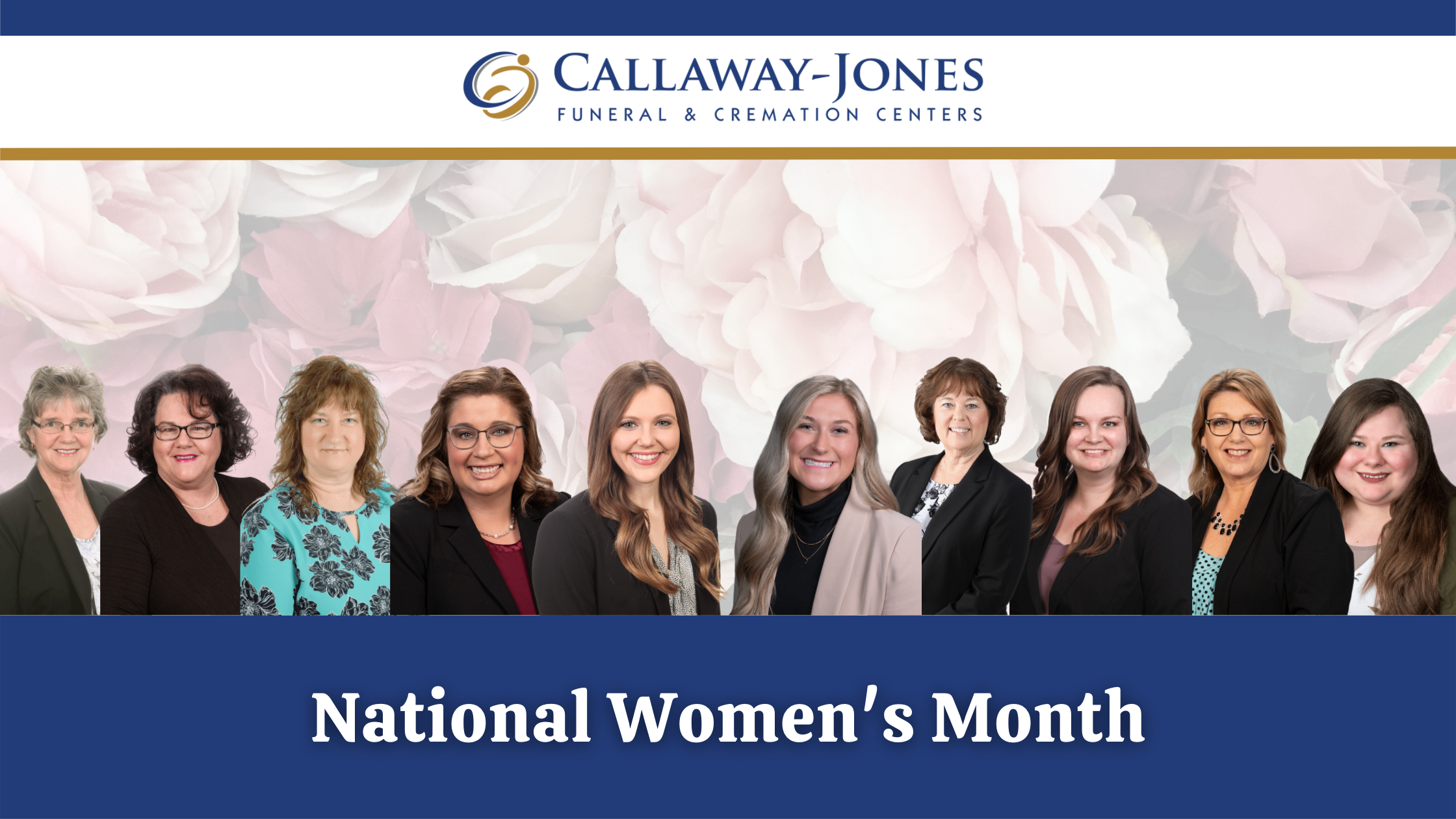 Celebrating National Women’s History Month in March is now in its 35th year. Congress set aside the month each year, after several years of having a National Women’s History Week, established by President Jimmy Carter. Children’s classrooms became a place and opportunity to learn even more about the contributions women have made through the years to improving our world.

From my youth, I’ve been very aware of seeing women as integral to the success of families, and especially in business. Reflecting over the past century, funeral businesses, as far back when they were called undertakers, were husbands and wives, working together, and living upstairs over the first floor where they operated their family funeral parlors, as they were once known.

For many generations in my own family, my mother Lorene, my grandmother Dian,  and beyond, were full partners in operating our business. When we built our new funeral home here at our original location, Chelsea and I worked equally on the design, exterior and interior, and together we made key choices. A strong, positive feminine voice contributes substantially and importantly to any project.

The funeral profession has long been respected for all the women who have made this business their career choice. Beyond this business, we have many local women who lead by example. For years St. Joseph Hospital was led by Sister Gretchen Kunz; ANCO Insurance was led by Kathy Gregory as President/CEO until her retirement. Recently, Nora Thompson was named CEO of First Financial Bank here, and Dr. M. Katharine Banks was named President of Texas A&M University. Just this week, Joni Taylor, formerly of Georgia was named Coach of the TAMU Women’s Basketball team!

Women as today’s leaders are not new, but there are so many lessons we can learn about the women who made history here in Bryan-College Station and in Texas in the past 50 years.

Today, we almost take it for granted that we can go to Downtown Bryan for entertainment, shopping, lodging for our out-of-town guests, and some very good food. It’s hard to remember that the last time Downtown was so busy was in the early 1970s, right before the area gave way to the popularity of Post Oak Mall in College Station as the center of shopping and activities.

History doesn’t have to be hundreds of years old to be important and relevant. Just 30 years ago, history was made in Downtown Bryan.

It was about 1990 when 4th generation Bryan resident Kay Conlee made it her mission to bring Downtown Bryan out of its state of dormancy into the active site of tremendous mercantile activity that it is today. She started by purchasing and renovating the old Central Texas Hardware Building, located at 202 S. Bryan. Meticulously she renovated the building and opened Old Bryan Marketplace on the right-hand side of the building and donated the use of the left-hand side of the building to the Children’s Museum of the Brazos Valley for six years until they could move into the old Bryan Police Station building. It was in 2000 that the inaugural Mayor’s Downtown Impact Award was created and presented to Kay Conlee.

The year 1990 was the year that Kass Prince, then Executive Director of the Arts Council of the Brazos Valley secured the commitment of Charmen Catlin and Louis Newman to create the first FestiFall ’90, a two-day celebration of the arts. Over 200 volunteers joined onto the organization that Catlin and Newman created and over 5,000 residents came together October 4-5, 1990, and for the next seven years, in celebration of the arts here.

The late arts patron Rose VanArsdel is the one who is responsible for establishing the strings instruction program at Bryan High School. A lifelong devotee of the piano and an accomplished musician herself, Rose was the one who saw a need for teaching local students violins and set about to raise the funds to staff and outfit the program. In addition to her own financial contributions, she wrote numerous successful funding grants and enlisted additional support of several good friends in town.

Keeping in mind that Bryan, Texas was not always the large metroplex it is today, it was in 1951 that beloved volunteer and talented dance Jane Lee opened the Jane Lee School of Dance. She taught ballet, tap, toe, and jazz dance for 40 years, so at least 3 generations of Bryan women benefited from her gifts and skills. After her retirement, she inspired and maintained such great enthusiasm for the Gift Shop at the old Crestview Retirement Home that when Crestview built its Arbor Oaks permanent residence, they named the gift shop in her honor.

Mell Pruitt (and her husband Willie) had a dream of creating an African American Museum here in the Brazos Valley. Starting with a core group of volunteers from the Bethune Women’s Club in Bryan, every year they grew closer and closer to the dream. Community residents joined together at Mell’s request to secure funding for this beautiful museum and portal of Brazos Valley history.

Were it not for civic leader Gardner Osborn and her championing of a cause dear to her heart, the Brazos Prenatal Clinic, there would be at least 20,750 women to have prenatal services, health education, etc. since the Clinic’s funding in 1985. Every year 12 women are honored in our community at the “You’re the Tops” luncheon, that “celebrates women who make a difference.”

As we wind down the month recognized and celebrated as National Women’s History Month, it’s only appropriate to look around the wonderful community we live in, learn a bit more about the people who make our lives special every day because of the things they took up as important, whether 50, 40, 30, 20, or even 10 years ago. We could not be the people we are today without the commitment and talents of so many women here.

Speaking personally, my special thanks and respect are extended to the women whose photo you see pictured here. They are an integral part of the Callaway-Jones family team. They serve our community and our family by giving their very best to what we do daily.

In addition to celebrating and saluting the women in our lives this year, let us remember to say “thanks” to women we know whose priorities included making things better for all of us here. May your light continue to shine for generations to come.