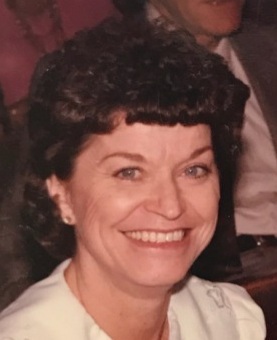 Send Flowers
November 15, 1933 – April 16, 2020
Prevented from having a funeral due to pandemic restrictions, we offer the following eulogy for Loretta:
On the night of April 16th, 2020, after a brief illness (not COVID-19), Margaret Loretta Marshall Raney, 86, passed away peacefully and readily into the arms of her Savior, Jesus Christ. Just a few days before, on Easter Sunday, she sang along to one of her favorite hymns, “In the Garden,” while visiting with one of her daughters. We now celebrate and remember our precious Loretta: “Sweet Wife” and beautiful mother, sister, sister-in-law, niece, aunt, cousin, Lolo, Nana, Grandmere, friend.

Loretta grew up with her younger sister in a small Southern Baptist home in Kannapolis, North Carolina, where her parents worked in the Cannon Mills textile factory. She was close to her large extended family there, but after graduating high school in 1952, she adventured to the big city of Charlotte, where she completed secretarial school, got a job as a secretary and lived with four girlfriends, forming lifelong memories. Many of her favorite stories came from this fun-filled time.

In the fall of 1956, at the age of 22, Loretta visited her best friend Becky Costello in Borger, Texas. She agreed to a blind date with a friend of Becky’s husband, a handsome Catholic from Kansas City named Paul. She fell in love with Paul that first night and it lasted the rest of her life. After a week-long visit in which they were inseparable, Loretta reluctantly returned to North Carolina. The next time she saw him, Paul came with a ring, and the third time she saw him, they were married on June 29, 1957. He was 28 and by then she was 23.

Life among his family could not be more different – she was the oldest of two children, he the youngest of 10 – but she was heartily welcomed into the big, boisterous, loving clan, and she quickly grew to love and rely on them all. She became particularly close to her sister-in-law Frannie, trading recipes and talking by phone daily to discuss the latest episode of “As the World Turns.” She also converted to Catholicism and remained devout the rest of her life. Settling in Houston, Loretta and Paul welcomed three spunky daughters in four years: Catherine, Anne and Martha.

Loretta was a career housewife with superior homemaking skills – she was a wonderful cook, she could get stains out of anything, she was a master with a budget, super organized and even in her 80s, she kept meticulous financial records – no IRS auditor could do better. Yet she still found time to be a darn good tennis player, a candy striper who brought the book cart to hospital patients, a Catholic lay minister serving Holy Communion to shut-ins, and such a student of collectibles that she wound up working at Eloise’s, her favorite collectibles store, for more than 10 years.

She loved needle crafts of all kinds, creating afghans, needlepoint and cross stitch, with a brief foray into hats and sweaters. She was also an accomplished seamstress, sewing clothes for her girls AND their Barbies, a voluminous prairie dress for Martha’s high school production of Oklahoma! and one practically famous Phyllis Diller costume that she wore to a Halloween party, accessorized with platinum wig and 10-inch cigarette holder, and delivering the unforgettable Diller laugh.

As a mother, she would tickle her children until they begged for mercy and tenderly rock them when they had a fever. She endured an endless parade of stray cats, frogs, turtles, hamsters, chickens and the odd roadrunner that mainly Anne brought home, Catherine’s countless play productions in the garage, and Martha’s dramatic feuds with friends. She tended her children’s broken limbs, surgeries, pestilence and plagues with Kool-Aid, popsicles and Jell-O at the ready.

She made them watch Nixon’s historic resignation speech (“because I said so”), but would not allow them to join their friends playing in historic hurricane floodwaters washing through the neighborhood (“if all your friends jumped off a cliff”). She dressed her girls for Sunday Mass, pinning veils to their heads and rubbing Vaseline on their patent leather Mary Jane’s; she cut their bangs and permed and pin-curled their hair, all the while ignoring their squirming, tortured wails. She and Paul loved filling the role of auxiliary parents to their niece, Pam Fontenot, who lost her parents as a teenager, loving and mentoring her as a daughter the rest of their lives.

She loved her girls, her grandchildren, and all her big family with fierce devotion. She spent her life serving her family, her many friends and her Lord with constance. She was a world-class caregiver, and tirelessly nursed her beloved Paul for a year until he passed away from cancer in 1991. Widowed at 57, she grieved deeply for a season, then created a joyful life for herself for another three decades, her precious memories of Paul ever with her.

Loretta took joy in many things: sunsets, hummingbirds, goldfish, gardening and flowers; playing and watching tennis, singing hymns, praying the rosary, and working word searches and jigsaw puzzles. She loved hamburgers and James Coney Island; Frank Sinatra and Burt Reynolds, Erma Bombeck and Fannie Flagg; collectibles, chocolate and Cheerwine (North Carolina soda pop); and laughter, so much laughter. She adored pets and children, cooing over them with such sweetness when she thought no one was looking.

She possessed a natural charm and grace that made people notice when she entered a room, but she never knew her beauty. She was a very private person, shining the spotlight on others, never on herself. She made all who knew her feel loved and safe, yet she loved being silly and catching you off-guard with her disarming wit. She was distinctively beautiful, as was her handwriting, and she was smart, determined and, oh, so loving.

She allowed hardships in her life to drive her closer to Jesus, deepening her prayers and increasing her faith and trust in God. Above all, she looked forward with joy to her eternal life with her Lord and Savior, Jesus Christ and her beloved Paul.

And so on that night when Jesus called, she didn’t hesitate. In addition to Paul, she joins her parents William Marion & Emma Absher Marshall, so many dear friends, especially Becky Costello and Julia Rakestraw, and many loving relatives in their eternal home in Heaven. She leaves behind her three grateful daughters and their families, Catherine Raney & Doug Slocombe, Anne & Mike Bohuslav, Martha & Ricky Taylor, eight grandchildren and four great-grandchildren, all in Texas. She also leaves sister and brother-in-law Gwen and Mike Isom (Miami) and a vast assortment of nieces and nephews across the nation. She bids fond farewell to old friends in Houston, among them Keith & Ruth Thayer, Bert Corrigan, Carol Jean Oliver, Carolyn Crawford and Rosemary Bach and new friends in College Station, Texas (Audie Rychlik, Betty Bishop, Pat Hoffman and Theresa Earle). Her family is grateful for the wonderful staff at The Langford senior community in College Station, where she found comfort and contentment for the past year.

In this strange time of world pandemic, we were unable to hold a funeral, just a few of her immediate family could gather for a short visitation at the funeral home and a tiny private graveside service officiated by Deacon Michael Quiray from St. Francis de Sales, her parish for more than half a century. She was laid to rest next to Paul at Forest Park Westheimer Cemetery in Houston. How we wish we could have honored her with a gathering of all who loved her, but we think she would have preferred what we did – she never liked to be the center of attention.

We thank you, Father God, for Loretta’s boundless love, and for speeding her home in peace when her work here was done. Amen.
Note: Memorial prayer cards are available by contacting Martha Raney Taylor at mostly.martha@yahoo.com or by leaving a request in the comments below.