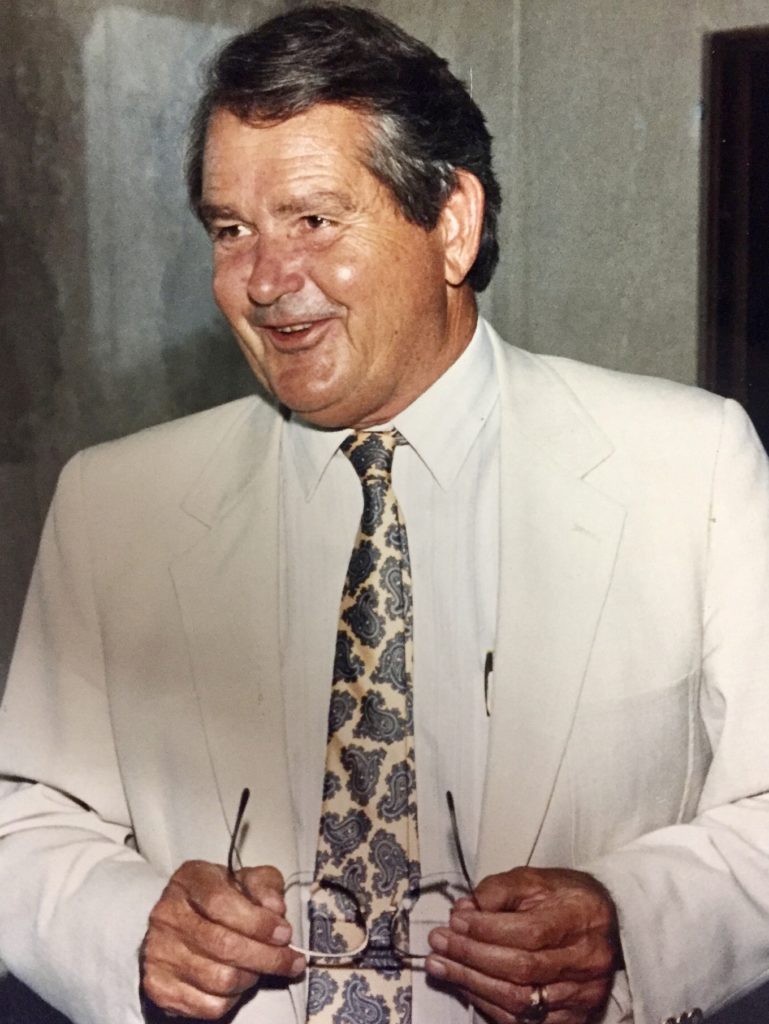 On the morning of Wednesday, the 29th of April 2020 Edwin H. Cooper peacefully passed away in his sleep from Alzheimer’s at The Waterford of College Station. A funeral service will be held on Saturday, May 2nd for immediate family and virtually for remote family members. A celebration of the life of Edwin will be held for all wishing to attend after the Covid pandemic recedes-details to be provided at a later date. Funeral arrangements are in the care of Callaway-Jones Funeral and Cremation Centers, Bryan-College Station.

Edwin was born in San Marcos, Texas to Margaret and Leslie Cooper, and in addition to attending elementary and junior high school there was ‘raised in’ the Methodist Church. With the help of his older brothers and friends Edwin sharply honed his fishing and hunting skills around the San Marcos River and in the Hill Country close by. He graduated from San Marcos High School in the spring of 1949 and entered Texas A&M as a proud member of the Fighting Texas Aggie Band. While at A&M Cooper was also a member of Alpha Zeta Fraternity (scholastic) and was a Distinguished Student. During the summer of 1951 Edwin married his high school sweetheart, Peggy Jean Martin, and they moved to Married Student Housing on the A&M Campus. In May 1953, he received a B.S. degree in Wildlife Management and was commissioned as a second lieutenant in the U.S. Army. He attended the Armor Basic Camp in Fort Knox, Kentucky, and then was assigned to the 2nd Armored Division in Baumholder, Germany through mid 1955. He received an Honorable Discharge from the US Army as a 1st Lieutenant, and returned to Texas to work as an Assistant Agriculture County Agent in Travis County. Edwin’s professional experience also included: Specialist in Wildlife Conservation, Texas Agricultural Extension Service, Assistant to President Earl Rudder, Director of Civilian Student Activities, Assistant to President Jack K. Williams, Director of Admissions, Dean of Admissions and Records, Director-Office of School Relations and Coordinator Special Projects-Educational Information Services, all at Texas A&M University. Upon retiring from A&M, Edwin and Peggy moved to Camp Creek Lake in Robertson County. From there he continued his fishing and hunting exploits with friends and family, contributed greatly to the leadership, growth and development of his grandchildren, wrote human interest stories for the local newspapers and enjoyed public speaking. Edwin especially enjoyed speaking at Aggie Musters across the state. One of our fondest memories is his muster speech delivered at Reed Arena on April 21, 2003.

Edwin’s civic involvement included: Vice President-BCS Jaycees, President Brazos County A&M Club, Councilman A&M Association of Former Students, Vice President BCS Chamber of Commerce, Board of Directors Aggie Band Association, Board of Directors BCS Quarterback Club. Cooper has served as a member of the Board of Trustees of the A&M Consolidated ISD, Chairman of the Board of St. Joseph Hospital, Class Agent of the Class of ’53, President of the Executive Committee of the College Board-Southwest Region, and was elected as a trustee to the College board. He served two years as Chairman of the National membership Committee-College Board. Edwin was enthusiastically involved in Methodist Church activities in Bryan, College Station and in Franklin, Texas.

Edwin is preceded in death by his parents, and older brothers and their spouses Jack & Jimi Neal and Charles & Laverta Cooper.

Our family sends heartfelt thanks to the staff at The Waterford in College Station and to Encompass Hospice Care for your excellent attention and care of Edwin. We are eternally grateful for your dedication and effort.

In lieu of flowers, please send donations to the Alzheimer’s Association at ALZ.org or to the Fighting Texas Aggie Band through: corps.tamu.edu.