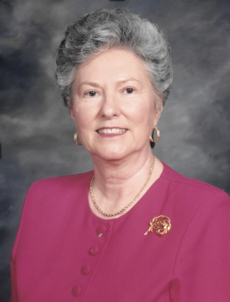 Barbara Ann McDonald Salisbury, 84, passed away January 14, 2020 in Bryan, Texas.  She was born to Lottie Gunter McDonald and Marshall McDonald in Conroe, Texas on September 13, 1935. She spent her childhood in Houston and Conroe surrounded by her extended family. She graduated  as salutatorian from Milby High School in 1952.  Barbara married Clarence Boles, Jr. in 1955 and travelled the world with him during his 27-year Air Force career.  She treasured her experiences living in Portugal, Scotland, Spain, California, Illinois, and Hawaii.  Upon her husband’s retirement, she moved to College Station in 1975 and worked at the TAMU Research Foundation.  Barbara was an entrepreneur and helped found Automated Clerical Services—a business that she co-owned and staffed for a few years.  She married Dan Salisbury in 1982 and worked alongside him many years at Kwik Kopy Printing.  Toward the end of her career, Barbara worked as a realtor with Century 21 Real Estate Agency while enjoying her clients and colleagues. Barbara and Dan were active members of St. Andrew’s Episcopal Church in Bryan and served on the church’s vestry.  During her retirement, Barbara enjoyed spending time with friends at the theater, cinema, and attending yoga classes.  Barbara was also an avid dog lover, and especially loved her miniature schnauzer, Kelsey.

Barbara is survived by her daughters, Elizabeth Boles Sander and Brenda Boles Rieger; sons-in-law, Hans Sander and Ron Rieger; as well as grandchildren, Andrew and Claire Sander, and Christopher and Matthew Rieger.

In lieu of flowers, her family ask that memorial donations be made to Hospice Brazos Valley.

A memorial service will be held at St. Andrew’s Episcopal Church in Bryan on Saturday, January 25, 2020 at 1 p.m. with The Rev. Daryl T. Hay officiating.  Interment will be in the parish columbarium.  A reception for family and friends will follow in the parish hall.

Services are in the care of Callaway-Jones Funeral and Cremation Centers of Bryan-College Station.