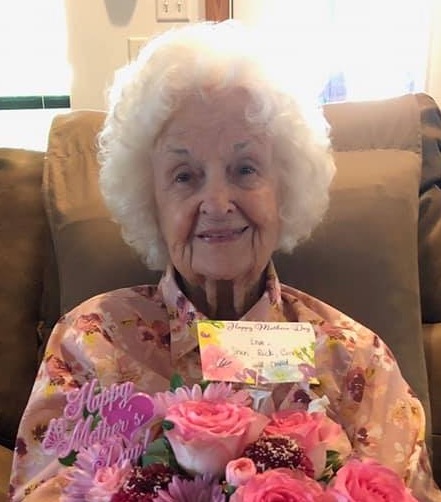 Shirley Kuhn, 89, of Hearne, passed away on Friday, July 19, 2019, in Bryan. Her Life Tribute Celebration will be at 11 am, Friday, July 26, 2019, at Pittman Cemetery Chapel in Muldoon, Texas. Interment will be in Pittman Cemetery immediately following. Reverend Jack Broadwater officiating services. Services are in the care of Callaway-Jones Funeral and Cremation Centers, Bryan-College Station.

Shirley Mae (Lee) Kuhn was born October 22, 1929 in Brahman, Oklahoma, to her parents, Jessie Richard Lee and Ruby Christine (Meador) Lee. Shirley was the 3rd of 4 children to Jessie and Ruby Lee. Shirley was raised on an oil lease in the Oklahoma plains. They moved to Magnolia, Arkansas when she was in junior high and she finished high school on June 1, 1947. The very next day she married William “Bill” Kuhn and they began a 71-year adventure.

She became the wife of a rough and tumble “doodle bugger”. Going from state to state chasing black gold. Counting up all the moves they made over the years from 1947 until 1964 they made 44 moves. Bill would come home from work on Friday, tell her the crew had moved, they would pack up their belongings and by Monday morning Bill was back to work and Shirley was trying to reestablish a home for them.

Shirley never had a job outside the home, but she was an accomplished seamstress, cook, chauffer and so many other things. They had 2 daughters, Connie Ann and Sheri Gaye, and she delighted in being a Mom. There were many years of their marriage that Bill traveled out of the country for work, this left Shirley and her girl’s time to set out on many memory making escapades of their own.

In 1964 Bill & Shirley moved to Houston Texas and for the 1st time lived in one place for 28 years. She loved children and volunteered her time at school and church. Shirley taught Sunday school and Vacation Bible School planting the seeds of Jesus in all her beloved students. Children who would grow up and always remember her as that “one special” Sunday school teacher.

Upon Bills retirement in 1992, they moved to Muldoon Texas. The place they truly called home. Shirley loved living in Muldoon and being a part of that community. She loved her church, working in her yard and garden, and traveling. She loved the mountains where she and her sweetheart visited often.

In October of 2018 Shirley lost the love of her life. She was broken hearted and longed for the day of their reunion in heaven. She is with him now walking hand and hand marveling at the beauty and their tour guide is none other than their Lord and Savior Jesus.

Her husband of seventy-one years, William (Bill) Kuhn; her parents Jessie and Ruby; her sister, Mary Ann (Lee) Townsend; and her brother, Jessie Richard Lee II, all precede her in death.